UK prime minister Theresa May says she deeply regrets her decision to seek a Brexit extension from the EU and urges MPs, who have twice previously rejected her plan, to back her now. 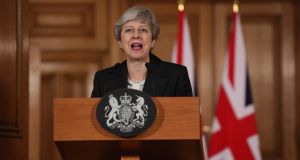 In her televised statement on Wednesday night, Theresa May sought to blame MPs for her decision to postpone Brexit by three months. Parliament had done “everything possible to avoid making a choice”, a daring charge to make for a prime minister with her record of indecision, backtracking and barefaced duplicity.

May’s pose as a champion of the people against parliament might impress voters who are exhausted by the machinations at Westminster over Brexit. But if her Brexit deal is to win approval next week, it is not the public, but the MPs she has demonised, that she must win over.

Her request for a one-off, three-month extension of the article 50 process and Donald Tusk’s response to it were designed to put pressure on MPs to back her Brexit deal next week. But by framing the choice as one between May’s deal and no deal, May and Tusk have robbed Brexiteers of an incentive to vote for it.

The prime minister’s hint that she would resign rather than seek a longer extension if her deal is rejected represents a strong inducement for many on all sides of her party to vote against it. And few in Westminster are convinced that if MPs reject the deal next week, the EU will simply allow Britain to crash out without a deal on March 29th.

The turmoil within the Conservative Party and uncertainty around the prime minister’s future has made it more difficult for the DUP to support her deal next week. One of the party’s central demands in its negotiations with the government is a legal guarantee that if the backstop requires Northern Ireland to adopt new EU regulations, the whole of the UK will follow suit unless the Stormont institutions decide otherwise.

The DUP has been unable to secure satisfactory assurances from May’s likely successors that they would respect such a guarantee and would not cut Northern Ireland adrift in order to allow the rest of the UK to diverge from EU rules after Brexit. The DUP can support other options for Brexit, including membership of the single market and the customs union, without endangering Northern Ireland’s place in the UK or harming its economy.

But a no-deal Brexit would leave the DUP in the same position as it would Taoiseach Leo Varadkar, with a bold negotiating strategy that had long been admired ending in disaster for themselves and those they represent.