At least 10,000 died in military detention in Nigeria – report 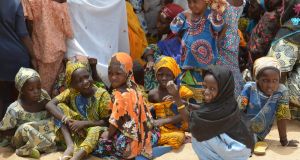 At least 10,000 people, including many children, have died in military detention during the Boko Haram insurgency in northeast Nigeria, according to Amnesty International.

The human rights organisation has published a 91-page report based on more than 230 new interviews, among them 48 children and 22 adults who were held in military detention for months or years under suspicion of being connected to the insurgents.

Children are screened, and sometimes interrogated, tortured and imprisoned, as they flee Boko Haram, an Islamist militant group that at one time controlled territory the size of Belgium. Arrests and the detention of suspects without trial is ongoing.

Boko Haram – which roughly translates as “Western education is forbidden” – was founded in 2002. The group has since split into factions, the breakaway group calling itself Islamic State West Africa Province.

In detention sites, including the Nigerian military’s infamous Giwa Barracks near Maiduguri, the city where Boko Haram was formed, disease was rampant, there were food and water shortages, interviewees said. Children had no access to toilets and there were parasite infestations.

One young man who was held for four years, beginning at age 17, said five or six people could die daily in his cell during hot weather. “In the morning, we’d take the bodies out,” he said.

Boys were held with adults, which they allege led to sexual abuse. “Some men give the small children food or Plumpy’Nut,” one 16-year-old told Amnesty International, in a reference to a peanut-based paste sometimes used to tackle malnutrition. “If they give children something, later they will sexually mistreat them. This happened openly.”

The Nigerian army has rejected the Amnesty report, describing the claims as “malicious”. The army has previously called for the human rights group to be banned from the country.

In 2017, The Irish Times travelled to Nigeria’s Borno State to interview children who had survived both Boko Haram and military detention. They described being indefinitely separated from their parents, who were also suspects.

Last year, in a preliminary examination, the International Criminal Court said there was a reasonable indication that the Nigerian military and the Civilian Joint Task Force (CJTF), a vigilante group that works with army, had attacked civilian populations, tortured detainees and recruited children under 15.

In interviews with The Irish Times in 2017, CJTF members admitted to using children as scouts to lead them to Boko Haram camps.

Schools were an early target of the insurgency, and roughly half of all children in northern Nigeria are now not getting a formal education, according to the UN advocacy body for children, UNICEFnicef.

“The past decade of bitter conflict between Nigeria’s military and Boko Haram has been an assault on childhood itself,” said Joanne Mariner, Amnesty International’s acting crisis response director. “It defies belief that children anywhere would be so grievously harmed by the very authorities charged with their protection.”