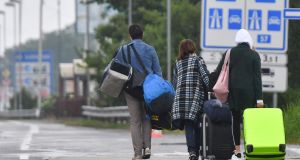 Slovak residents can now visit eight countries for 48 hours without providing a negative coronavirus test or going into quarantine on their return, but the cautious opening of borders across the region has already sparked a row in the Balkans.

People living in Slovakia are allowed from Wednesday to spend two days in Hungary, Poland, the Czech Republic, Germany, Austria, Croatia, Slovenia and Switzerland without facing restrictions when arriving home.

Hungary and the Czech Republic introduced the same two-day rule for residents who want to travel to the other country or to Slovakia.

The Czech and Slovak governments swiftly closed borders, imposed tight lockdowns and made it mandatory to wear a face mask outside in March, and they are now among Europe’s quickest to ease restrictions as the pandemic abates.

Both countries lifted the rules on mask wearing outdoors in recent days, and on Monday Czech pubs, restaurants and hotels allowed guests back into indoor areas, and schools and swimming pools also reopened. Rules on physical distancing remain in force, however.

The Czech Republic started reopening all road and rail crossings with Austria and Germany on Tuesday, but only people travelling for work, family or study reasons are allowed into Czech territory and they must present a negative Covid-19 test if stopped at the frontier, where police checks are gradually being reduced.

Hungary is expected to allow the indoor areas of restaurants, bars and cafes to reopen on Friday, and the nationalist government of prime minister Viktor Orban submitted a Bill to parliament on Tuesday to revoke its power to rule by decree.

Democracy watchdogs expressed alarm in late March when a parliament dominated by Mr Orban’s allies granted him sweeping powers for an indefinite period under a state of emergency imposed because of the pandemic.

“In recent months, the Hungarian government has been attacked with baseless allegations,” she said of critics’ claims that Mr Orban was using the pandemic to stage a power grab.

“We expect those who attacked us . . . to apologise for mounting a smear campaign instead of co-operating in the defence [against coronavirus].”

Hungary and Serbia reopened their borders to each other’s citizens this week, and Serbia has now lifted entry restrictions for most of its neighbours.

Montenegro declared itself free of coronavirus this week and announced that citizens of several countries with “a similar epidemiological status” could visit from June 1st.

The omission of Serbia from the list exacerbated political strains between the Balkan states, however, and prompted Serbian prime minister Ana Brnabic to urge compatriots to “not go where they are not wanted.”

Serbian aviation officials said on Wednesday they had banned Montenegro Airlines from landing at Belgrade airport, to which it had planned to resume flights next week.