Coronavirus: Denmark is reopening society quickly. How is it faring? 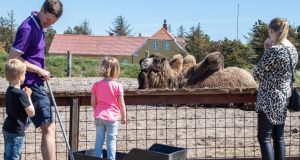 Visitors look at the animals in their enclosures at the Blaavand Zoo, in southwest Jutland, Denmark. Zoos reopened in the country late last week. Photograph: John Randeris/EPA

Denmark was one of the first European countries to close down its public spaces to stem the spread of coronavirus, shutting its borders, schools and restaurants in mid-March.

Its swift response seems to have paid off. As Covid-19 cases plummeted, Denmark last month became the first EU nation to reopen primary schools. Its restaurants, hairdressers, shops, museums and zoos have now all followed suit. The authorities in Copenhagen are promising a massive ramping up of testing to minimise the risk of a second wave of infections.

Neighbouring Sweden hogged the international headlines for its relaxed, no-lockdown approach to the virus but experts say Denmark’s cautious response was a counter-example worthy of attention.

“Denmark is top of the class when it comes to a fast response. We have built a bubble around Denmark,” said Soren Riis Paludan, professor of virology and immunology at Aarhus University.

But he added that the country’s biggest challenge was not a second wave of infections but ensuring the economy recovered. “We have been hit at the very heart of our economy and our culture. We are an outward-facing nation and we can’t be that at the moment – that is the challenge,” he said.

Denmark has had 563 coronavirus deaths so far, with just 12 in the past week. That gives it a per-capita death rate roughly similar to neighbouring Germany, double that of Norway, and about a quarter of Sweden’s.

Mette Frederiksen, Denmark’s centre-left prime minister, this month said coronavirus was “under control” in the country and was speeding up a reopening of society.

Theme parks, museums and zoos were last week allowed to open several weeks earlier than planned after health experts concluded that there had been no increase in the so-called reproduction rate in the month since schools started again, although they were not sure why.

Now the focus is moving to the health of Denmark’s export-orientated economy.

Denmark’s government said on Tuesday that it expected GDP to contract by 5.3 per cent this year, on the same day as Sweden’s finance minister said its economy was likely to shrink by about 7 per cent.

Magdalena Andersson told the Financial Times that Denmark’s main exports of “drugs and pigs” – pharmaceuticals and food – meant it was likely to “take less of a hit than the Swedish economy”, which relies more on cars, trucks and heavy industry.

Henrik Poulsen, chief executive of the Danish renewable energy company Orsted, praised the government for being “decisive” and keeping the pandemic “well contained”. He added: “That becomes the foundation for a relatively fast reopening of society and business. The art of it is not to let go of that opportunity to bring business back to life.”

Soren Skou, chief executive of shipping group AP Moller-Maersk, said he was also keen to see the government boosting domestic consumption and opening up for tourism.

But he added: “The biggest risk we have is that we don’t deal with the unemployment.” The official jobless rate is about 4 per cent but the government is picking up the wages of many workers under a short-time working scheme, which would push the rate to about 10 per cent.

Politically, one difficult question is the opening up of borders. Opposition politicians have urged Frederiksen to open up to Germany and Norway immediately to help tourism before the crucial summer season, as well as to further ease the flow of goods.

The problem is if we loosen up too quickly, the public feeling will be that it’s over and we can go back to how we were.

More controversial has been the suggestion by several right-wing parties not to open the border with Sweden despite a relatively low infection rate in the neighbouring Swedish region of Skane.

Paludan said the challenge of encouraging people to behave normally again was as much psychological as political or economic.

“Danes do what they are told. That has its effect in the lockdown. But for the opening-up stage, I see a tendency towards cultural distancing and closing off from the outside world. You have put people in a cave and it’s hard to get them back out,” he added.

Allan Randrup Thomsen, a professor of virology at the University of Copenhagen, said he was worried that the focus on the economy and opening up could lead Danes to lower their guard.

“The problem is if we loosen up too quickly, the public feeling will be that it’s over and we can go back to how we were. So my main concern isn’t the physical opening itself but the impact on behaviour,” he said, adding that there was already anecdotal evidence that Danes were not washing their hands as often as last month.

He added that one big difference with Sweden was that, according to the latest results for several weeks ago, only about 1 per cent of the Danish population has had coronavirus whereas about 7 per cent of people in Stockholm had.

Paludan said it was still early days to judge how any country had fared in tackling Covid-19 but he thought a hybrid approach from the Nordics could work. Denmark closed its schools against the advice of its health authorities.

He added: “You could probably argue that the next time we see a pandemic the correct approach is something between Denmark and Sweden – close something down but not everything.”– Copyright The Financial Times Limited 2020