‘I can’t breathe’: Four US officers fired over death of man pinned to ground 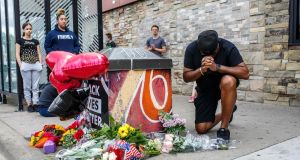 A protester prays in front of the memorial of George Floyd who died in police custody on Monday in Minneapolis, Minnesota. Photograph: Kerem Yuce/AFP via Getty Images

Four Minneapolis police officers who were involved in the arrest of a black man who died in police custody have been fired after a bystander’s video showed the man pleading that he could not breathe as a white officer knelt on his neck.

Minneapolis mayor Jacob Frey tweeted about the firings, saying: “This is the right call.”

The man’s death on Monday night after he struggled with officers is under investigation by the FBI and state law enforcement authorities.

“Being Black in America should not be a death sentence. For five minutes, we watched a white officer press his knee into a Black man’s neck. Five minutes. When you hear someone calling for help, you’re supposed to help. This officer failed in the most basic, human sense,” Mr Frey posted.

Police said the man matched the description of a suspect in a forgery case at a grocery store, and that he resisted arrest. The unidentified officer ignores his pleas. “Please, please, please, I can’t breathe. Please, man,” the man is heard telling the officer.

Several witnesses had gathered on a nearby pavement, some recording the scene on their phones. The bystanders became increasingly agitated as the man pleaded with police. One bystander told officers they needed to let him breathe. Another yelled at them to check the man’s pulse.

The man who died was identified as George Floyd by Ben Crump, a prominent civil rights and personal injury lawyer who said he had been hired by Mr Floyd’s family.

“We all watched the horrific death of George Floyd on video as witnesses begged the police officer to take him into the police car and get off his neck,” Mr Crump said in a statement. “This abusive, excessive and inhumane use of force cost the life of a man who was being detained by the police for questioning about a non-violent charge.”

In Minneapolis, kneeling on a suspect’s neck is allowed under the department’s use-of-force policy for officers who have received training in how to compress a neck without applying direct pressure to the airway. It is considered a “non-deadly force option,” according to the department’s policy handbook.

The Hennepin County Attorney’s Office, which would handle any prosecution of police on state charges, said in a statement that it was “shocked and saddened” by the video and pledged to handle the case fairly. – AP