Four Monsoon and Accessorize outlets to close in Republic 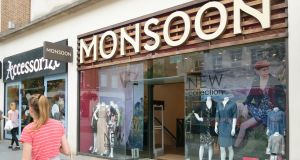 Four Monsoon and Accessorize stores in the Republic will close after the entire business was sold as a result of an administration process.

Two stores on Cork’s Patrick Street, one on Grafton Street in Dublin and one in the Market Cross Shopping Centre in Kilkenny will permanently shut as a result of the deal.

In total, as part of the deal 35 stores across Ireland and Britain will shut with about 545 staff being made redundant. The company will retain five stores in the Republic.

The British fashion retailers made the decision as part of a restructuring led by its founder to survive the Covid-19 crisis. Administrators from business advisory company FRP were appointed late on Tuesday and immediately sold the company’s business and assets to Adena Brands, a company ultimately controlled by Peter Simon, who owned and founded Monsoon in 1973.

The coronavirus pandemic and the subsequent lockdowns had made the business unviable. Under a so-called pre-pack administration, a UK company goes into a formal insolvency process but immediately emerges under a new ownership structure in a pre-arranged deal.

Adena acquired the Monsoon and Accessorize brands, their digital business, along with the intellectual property, the head office and design teams, and the group’s distribution centre in England.

Adena will now enter talks with the landlords of Monsoon and Accessorize’s 162 remaining stores to see if they can reach terms to reopen them when the current lockdowns end. Adena said it hopes to save up to 100 stores and 2,300 jobs.

“We will now try to save as many of our stores as possible, depending on the outcome of various discussions with landlords,” said Mr Simon. – Additional reporting: Reuters