Why did Varadkar change his mind on abortion? 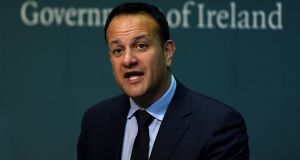 Taoiseach Leo Varadkar said two significant cases convinced him that abortion had no place in the Constitution. Photograph: Clodagh Kilcoyne/Reuters.

Taoiseach Leo Varadkar has said two significant cases that he was briefed on during his time as minister for health (2014-2016) convinced him that abortion had no place in the Constitution.

Speaking after the Cabinet meeting on Monday night, he highlighted what he described as “the heartbreaking case of a woman who was clinically dead but on life support while the baby she was carrying remained alive for a time”.

This case was analysed by Ruadhán Mac Cormaic in December 2014.

Mr Varadkar also referred to the case of Miss Y, an asylum-seeker, who was turned back from an English port when she sought to travel there for a termination.

“She subsequently became distraught, went on hunger strike, and became suicidal,” he said.

On Monday night, Mr Varadkar said: “These cases should have been matters for the women concerned, their next of kin, and their doctors. Both were decided in the Courts due to the Eighth Amendment.

“Doctors seeking advice on what to do in difficult situations should refer to clinical guidelines, not to Bunreacht na hÉireann.

“That’s why I called for change in the Dáil in December 2014. I believed we could no longer approach the issue with cold certainty but needed to do so with compassion.”