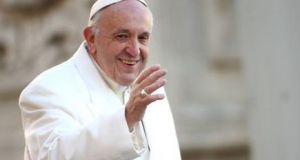 Five pictures featuring same-sex couples have been removed from a reissued booklet sent to Catholic parishes in preparation for the visit to Ireland next august of Pope Francis for a World Meeting of Families event.

The text of the publication has also been edited. A line in the original booklet has now been removed. That line stated: “While the Church upholds the ideal of marriage as a permanent commitment between a man and a woman, other unions exist which provide mutual support to the couple. Pope Francis encourages us never to exclude but to accompany these couples also, with love, care and support.”

The original booklet was sent to parishes across the State last month, and had been available on the World Meeting of Families website for some time.

Last October it prompted an article on the US-based right-wing Catholic website LifeSiteNews which accused Ireland’s Catholic bishops of “using Pope Francis’s teachings on marriage and family to promote homosexual couples as a new form of ‘family’ in the upcoming World Meeting of Families”.

It said the booklet contained “explicit promotion of homosexual relationships as a form of family, saying that such relationships provide ‘mutual support’ for active homosexuals”. Page 24 of the document contained “a picture of two lesbians on a bridge clinging intimately to one another”, it said.

LifeSiteNews had “reached out to Archbishop [Diarmuid] Martin, who is overseeing the World Meeting of Families, and asked if the homosexual image and text was inserted into the program by mistake. No response was given.”

It noted how earlier last October “Bishop Brendan Leahy of Limerick said homosexual couples must be welcomed at the World Meeting of Families”, and that in October 2016 Archbishop Martin said Catholic bishops should not “allow ourselves to be become entangled in trying to produce definitions of the family” because different cultural values mean family “cannot be defined simply”.

The LiteSiteNews article pointed out, however, that the Catholic Church “declares authoritatively and for all time that homosexual acts are ‘acts of grave depravity’ and ‘intrinsically disordered’ since they are ‘contrary to the natural law’ in that they ‘close the sexual act to the gift of life’.”

It noted how in Amoris Laetitia, an exhortation from the pope after the last synod on the family, he “specifically stresses: ‘every person, regardless of sexual orientation, ought to be respected in his or her dignity and treated with consideration’.”

It did not explain the reason for changes to the booklet.

Dublin was chosen by Pope Francis to host the next World Meeting of Families from August 21st-26th, 2018. Held every three years, the international event brings together families from across the world to celebrate, pray and reflect upon the central importance of marriage and the family “as the cornerstone of our lives, of society and of the church”.

The event is being hosted by the Archdiocese of Dublin, which has appointed a team to work with families, young people, women and men, clergy, religious and others from all over Ireland who will be involved in the planning of the event.