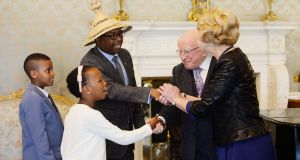 President Michael D Higgins and his wife Sabina greet Kutloano Pheko, charge d’affaire for the Embassy of Lesotho, and his children Riaz and Lumka at Áras an Uachtaráin. Photograph: Alan Betson

President Michael D Higgins has said he and all Irish people look forward to welcoming Pope Francis to Ireland this August.

“This past year was yet another in his pontificate in which he offered his words of inspiration, hope and very necessary reminders of our shared obligations not only to humanity but to biodiversity on our planet,” he said.

He also noted this year would commemorate the end of the first World War.

In Ireland, “as part of our Decade of Centenaries, while we will remember the end of the first World War and will honour the Irish who fought and died in it” people would “also remember and commemorate the general election of December 1918 influenced as it was by a widespread rejection of conscription.

“That election was a key point in Irish history because it provided the democratic mandate for the first Dáil.”

It had a further significance as “the first election in which women in Britain and Ireland were able to vote,” he said. “While 1918 was therefore a new beginning in Ireland, it also represented a failure in a wider European context.”

Mr Higgins said he hoped this year would “bring an early restoration of all the institutions of the Good Friday agreement, and that the agreement in all its parts is fully protected and respected in the context of the UK’s withdrawal from the EU.”

The President was speaking on Wednesday in Áras an Uachtaráin at a new year’s greeting ceremony for ambassadors and consular representatives of some 60 countries that have diplomatic relations with Ireland.

In particular, he welcomed Dean of the Diplomatic Corps Archbishop Jude Okolo, who was recently appointed papal nuncio to Ireland.

“Last Thursday, I had the opportunity to meet the contributors to a volume entitled ‘Laudato Si’: An Irish Response’, a collection of essays containing the reflections of Irish theologians, academics, and environmentalists on the second encyclical of Pope Francis,” he said.

The book, which was given to the pope by former president Mary Robinson on a visit to Rome, was a reminder that Archbishop Okolo was “the representative of a papacy that has made such a vital contribution to the dialogue we urgently need on the immense threats to our shared but increasingly vulnerable planet – threats which constitute nothing less than an ‘ecological crisis’.”

Referring to the first World War, President Higgins said it, above all, represented “the failed consequences of a particular model of diplomacy – the diplomacy of the strong seeking hegemony.

“It was one that embraced cynicism, that asserted a narrow hegemonic theory of interests over idealism, and the projection of national power above the recognition and rule of international law.”