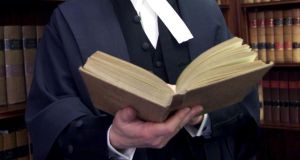 As three judges and 17 lawyers pored over the finer points of constitutional law in recent days, the body of a brain-dead woman in her mid-20s lay quiet and still in a hospital’s intensive care unit. File photograph: Marc O’Sullivan/Collins

Her father had taken in every word, his eyes locked on the bench, as Mr Justice Nicholas Kearns’s voice filled the otherwise soundless courtroom.

It wasn’t until the final few words, when the decision was confirmed, that he clasped his family members’ hands, closed his eyes and pushed away a tear.

No morally serious person could have watched the horror show that unfolded in the High Court over the past few days and not been struck by the deepest sense of sadness and unease.

Sadness at the tragic death of a pregnant young woman. Unease that it was here, in the deserted, echoing walls of the deserted Four Courts at Christmas, that her bereaved and shaken family came to have the State acknowledge that she was dead – and by extension, according to unanimous medical opinion before the court, that the foetus had no realistic chance of survival.

It’s hard to think of a more unsettling case. As three judges and 17 lawyers pored over the finer points of constitutional law in recent days, the body of a brain-dead woman in her mid-20s lay quiet and still in a hospital’s intensive care unit.

She was declared brain-dead three weeks ago; from that point on, one doctor said, she ceased to be a patient and became a corpse.

Two consultants were close to tears as they described her state. Make-up had been applied to her face because her children came to see her, the court heard, but she bore little resemblance to the beautiful young woman in the picture by the bedside. Her eyes were so swollen that they would not close. She had ongoing infection, presumed to be pneumonia, she appeared puffy and her abdomen was inflamed and discoloured. She had painted nails. She had an open head wound and the brain – where blood had not flowed since December 3rd – appeared to the naked eye to be rotting.

Around her, a life support machine and six syringe pumps beeped and whirred. One consultant neurologist said he had seen some terrible things in his career, but he had never seen a case like this.

Two days before Christmas, the court heard from seven consultants in obstetrics, neurology and intensive care. All agreed that life support should be ended. The foetus was at 15 weeks’ gestation when the woman was declared brain-dead, and the court was told the chances of it surviving were virtually non-existent. Her father sought a declaration to allow the machine to be switched, off, and the HSE agreed.

While this wasn’t an abortion case, it did engage article 40.3.3 of the Constitution – the Eighth Amendment – which sets down the equal right to life of the mother and the unborn and stipulates that the State will defend these rights as far as is “practicable”.

The unanimity among medical experts about the prognosis for the survival of the unborn made this relatively straightforward. As the judges noted, the medical evidence was “all one way”. If the woman’s brain death had occurred at 20 weeks, for example, and if the medics disagreed on the chances of survival, the court would have been in an impossible situation.

In making its decision, the three-judge court of Mr Justice Nicholas Kearns, Ms Justice Marie Baker and Ms Justice Caroline Costello didn’t only rely on the “practicability” qualifier in the Eighth Amendment. They also stressed the best interests of the unborn and the mother’s right to dignity in death (the court was “unimpressed” with the suggestion that she had no dignity left).

That dignity notwithstanding, the court inevitably found itself coming up against article 40.3.3, which although designed to ban abortion is worded more broadly than that. The court approached it as follows: it found that when the mother dies, the rights of the unborn “must prevail over the feelings of grief and respect for the mother who is no longer living.” So the question then became one of “how far the court should go in terms of trying to vindicate that right in the particular circumstances which arise here.”

Not as far as keeping a brain-dead woman on life support when there is virtually no chance of the foetus surviving, it concluded. To do so “would deprive her of dignity in death and subject her father, her partner and her young children to unimaginable distress in a futile exercise which commenced only because of fears held by treating medical specialists of potential legal consequences.”

The judgment is rooted in the specific facts of this case, but the events of the past few days raise searching and difficult questions.

A case like this could have arisen without the Eighth Amendment. As pointed out in an article written in 2004 by seven Irish-based specialists, published in the journal Intensive Care Medicine, maternal brain death poses legal and ethical dilemmas in many countries. For example, a foetus of 13 weeks has no legal rights in Sweden and Germany, very limited rights in Denmark and Greece and further limited rights in Portugal and Spain.

In Ireland, owing to the Eighth Amendment, the foetus is accorded a constitutional right to life from conception. It’s a safe assumption that the politicians who championed that amendment, and the 840,000 people who voted for it – the youngest of whom are now in their 50s – did not envisage what happened in the High Court this week.

But we know from the evidence that the reason doctors felt they could not end life support was because they feared the legal consequences of acting on their unanimous clinical judgment.

One consultant neurologist described the surreal moment when he and an obstetrics specialist found themselves sitting down with a copy of the Constitution, trying to “figure it out”. They then approached the family and told them they could not accede to their request to end life support “for constitutional reasons”.

By any measure, this is an extrordinary position in which to leave doctors.

In 2001 and again in 2003, after cases of maternal brain death in Waterford and Galway, clinicians called for guidelines on what to do when cases such as these arise. What greeted them on both occasions was silence.

Before the court rose, the three judges paid tribute to the young woman’s father and partner for “their immense courage and fortitude” in dealing with “the catastrophe which has befallen them and which has been compounded by the necessity of coming to court to give evidence.”

It was in keeping with the grave yet respectful, almost reverential, tone of the past few days in the High Court. Somehow, it felt as if a measure of decorum and solace had been restored.

In the end, her family members quietly embraced before thanking their lawyers and setting off for home.