Dublin landlord may be arrested after forced eviction 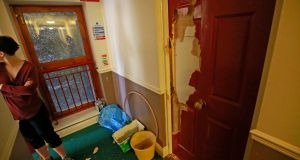 The door to an apartment on Dublin’s Mountjoy Square, which was allegedly damaged after landlord Paul Howard allegedly smashed his way in on Sunday morning. Photograph: Nick Bradshaw

A Dublin landlord, who forcibly entered an apartment on Sunday morning and removed five young people staying there, faces potential arrest for alleged breach of a High Court injunction.

Businessman Paul Howard and a number of men allegedly smashed the door to the apartment he owns on Mountjoy Square, Dublin 1 at about 10am and entered the bedrooms where the young people were sleeping.

The occupants, all in their 20s, say they were assaulted during the incident, and locked out of the apartment dressed in night clothes without shoes or other belongings.

The upper left of the door was smashed through when The Irish Times arrived shortly before 11am. The occupants were standing in the corridor with two gardaí from Fitzgibbon Street Garda station. One young man was dressed only in a T-shirt and boxer shorts.

The Garda had been called by the young people.

Mr Howard and a number of others could be heard inside the apartment. An electric screwdriver could be heard, and screws seen coming though the door from the inside, apparently to prevent the door being opened.

A number of injuries, including bruised ribs, red marks around the neck, a bruised forehead and small cuts on hands and forearms, could be seen on the bodies of three of the five people who were in the apartment. One was a tenant, while the others were housing activists who had been invited to stay in the apartment by one of the six tenants.

Mr Howard has been in dispute with the six tenants since December, when he attempted to evict them.

In November, he had sought a rent increase beyond the 4 per cent permitted in a designated rent pressure zone. The tenants, who are all in their 20s and from France, Germany, the US and Brazil, refused to pay the increased rent. Mr Howard then changed the locks and cut off electricity to the apartment.

Three of the tenants – Verena Lauer, Rejane Radthe and Madigan Johnson – lodged disputes with the Residential Tenancies Board (RTB) challenging the rent increase.

The RTB obtained a High Court injunction on December 20th preventing Mr Howard from entering the apartment until the RTB process, including any appeal to the Residency Tribunal, was complete. The case came before the RTB on January 9th and 11th, resulting in a monetary award to the tenants.

Ms Radthe said the tenants were appealing to a tenancy tribunal.

Their solicitor Gary Daly, who was present at the scene on Sunday, said the injunction remains in place and he will take instructions on Monday as to whether to seek to have Mr Howard removed from the apartment and arrested.

“There are two separate issues here. There are the potential assault charges and the breach of the High Court injunction.”

Ms Radthe, from Germany and a PhD student at Trinity College, told The Irish Times she had been staying with a friend because she was uncomfortable staying at the apartment following a number of unannounced attempts by Mr Howard to enter it. She said she had asked a number of housing activists to stay there as her guests “to protect the tenancy” until the appeal was heard.

Helena Roig (27), from Spain, said she had been asleep in the apartment when she heard “really loud banging and noises. It was like construction tools.

“I realised there were people getting into the apartment. Three men came into my room. It was like a terror movie,” she said. “I just said, ‘Okay, I’m leaving.’”

Mr Howard declined to come to the apartment door to speak to The Irish Times. A man took a phone number and said he would “pass it on” to Mr Howard.

Mr Howard remained in the apartment on Sunday night.