My Budget: Prescription charges ‘should be scrapped completely’ 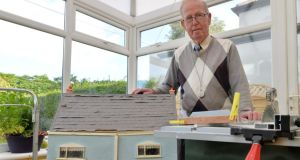 Pensioner Noel Nutley (89) with the scale models he makes at his home in north Dublin. Photograph: Alan Betson / The Irish Times

Noel Nutley (89), living in Raheny, north Dublin said the €5 increase in the weekly State pension will be eaten up immediately by the rising cost of his electricity and gas bills.

Meanwhile, the pensioner was also critical that the weekly increases from the Department of Social Protection would not kick in until late March, unlike the once-traditional habit of paying increases quickly.

The reduction in prescription charges from €2.50 to €2 for medical card holders under 70 years of age would not impact him. “The charges were brought in during the bad times, I think [they] should be scrapped completely,” he said.

“I’ve a brother on 14 different tablets, he’s over 70 so he’s not getting any reduction whatsoever in this budget. Most pensioners over 70 years of age would be taking six or seven tablets,” he said.

Mr Nutley said another big disappointment from the budget was the lack of any new measures to help young people trying to purchase a home. “I have grandchildren looking for housing who don’t know how they’re going to get a deposit, there was nothing for them at all,” he said.

The lack of any major boost in funding or solutions for the struggling health service was also a big concern that many old age pensioners would share, he said.