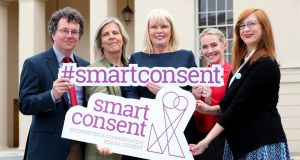 Minister of State for higher education Mary Mitchell O’Connor said she is considering making classes on sexual consent compulsory in all Irish colleges.

Ms Mitchell O’Connor was speaking at the publication of research from the National University of Ireland Galway (NUIG) that found 70 per cent of female students and 40 per cent of male students said they experienced sexual hostility or crude gender harassment by the time they were finishing third-level education.

Ms Mitchell O’Connor said following the study “it is time” to examine how workshops on sexual consent could be made compulsory in Irish universities and Institutes of Technology.

According to the study, 70 per cent of women and more than 60 per cent of men surveyed felt sex education at secondary school wasn’t satisfactory, while lesbian, gay and bisexual students found it to be even less relevant.

The study, based on answers from 3,500 students, was conducted at NUIG via consent workshops at four colleges.

Ms Mitchell O’Connor said she was “very surprised” by the results, which she found “troubling”.

“I believe it is timely and appropriate to formulate a standard of institutional responsibility, to address sexual harassment and assault,” she said.

Higher education institutions receiving public funding will have to meet a new minimum standard of practice, in how they are tackling the issue of consent, and sexual harassment and assault on campuses, she said.

This would include moving work some colleges were doing voluntarily, such as consent classes, onto a formal footing, she said.

“We will be collaborating with the third-level sector themselves to arrive at the best fit for such a standard,” the Minister said, adding her office would be writing to all higher education institutions in the next number of weeks.

“We need to ensure there is a minimum standard of competence, of excellence, for the presentation of consent workshops in higher education institutions,” she said.

“To be fair there are higher education institutions right across the sector rolling out different initiatives, and I really need to pull the whole lot together, join the dots, and make sure that we have really good workshops in place for our third level students,” the Minister said.

The students’ union plans to extend the workshops to college sports clubs and societies.

Last year University College Dublin students’ union cancelled workshops on consent they had offered, due to low uptake from students.