Andrea Bocelli to perform at World Meeting of Families

Italian tenor will sing for Pope Francis at Croke Park 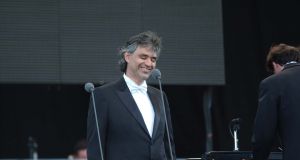 Italian tenor Andrea Bocelli is to perform at the World Meeting of Families in Dublin later this month.

He will take part in the Festival of Families in Croke Park on Saturday, August 25th, which will be attended by Pope Francis, organisers have said.

Mr Bocelli has performed for the Pope before, including at the last World Meeting of Families in Philadelphia in 2015.

Event organisers have said he is a devout Catholic and regularly donates his time and talent to religious causes and events.

Commenting ahead of his performance in Dublin, he described singing before Pope Francis as a “privilege for our soul” and “an honour”.

“For the indescribable human fragility, typical of the average man such as myself, it brings me great pleasure and immense satisfaction to even have the privilege to be close to a person of such exceptional importance and grace,” he said.

“It is a joy to be able to offer my most modest contribution on the occasion of this grand meeting and moment of reflection about the family. The family remains the strongest building block of society, a cluster of affection, and a privileged space in which one can teach and learn – in every action - how to choose a life that leads toward the greater good.”

He will join other well-known performers at the event including Nathan Carter, The Riverdance Troupe, Dana Masters, Daniel O’Donnell, The Begley Family and The Priests.

The Festival of Families will also include an orchestra with more than 50 musicians; over 700 Irish, Sean Nós and contemporary dancers, a 1,000-member choir; 100 community groups, and 300 flag bearers.

Fr Timothy Bartlett, Secretary General of The World Meeting of Families 2018 (WMOF2018) said organisers were delighted that Mr Bocelli would be performing.

“He will bring so much to our gathering not just because of his wonderful talent but because of his love for his faith,” Fr Bartlett said. “We are honoured that he has taken time out of an intensely busy schedule to come to Ireland to be part of our global celebration of family life.”

Tickets for the event, which were free of charge, have been booked out.

The 9th World Meeting of Families will take place in Dublin from August 21st to 26th. Pope Francis will visit Ireland as part of the event.