August 1st, 2018: After meeting Leo Varadkar, Vicky Phelan says the Taoiseach promised her "he meant what he said” when he had announced that women caught up in the CervicalCheck controversy would not be forced to go to court for compensation. Video: Enda O’Dowd 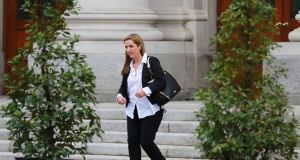 Vicky Phelan has criticised the “lack of empathy” by some people towards some of the women and their families affected by the CervicalCheck screening controversy.

Ms Phelan, the terminally ill Limerick woman who first brought the CervicalCheck controversy to light when she settled a High Court action for €2.5 million against a US laboratory which allegedly misread her smear tests, met Taoiseach Leo Varadkar at Government Buildings in Dublin on Wednesday.

She has been assured by Mr Varadkar that the State will try to settle through mediation all further cases being taken by women and their families affected.

Ms Phelan wrote on Twitter late on Tuesday night that she plans to take a break from her activism on the CervicalCheck controversy.

She wrote a series of tweets outlining her reasons. In one she said: “I will be taking a break from Twitter and from all #CervicalCheckScandal campaigning after tomorrow, some of you will be glad to know. I am deeply disturbed by the lack of empathy in some quarters towards the women & families affected by the scandal.”

Another tweet read: “I can only speak for myself here. For those of you who are condemning me for ‘bringing down the cervical screening programme’, I never missed a smear and NEVER had an abnormal smear until I was diagnosed in July 2014 with invasive cervical cancer.”

Speaking after her meeting with Mr Varadkar on Wednesday evening, she referred again to the criticism she and other women affected by the Cervical Check controversy have received.

“I wanted to hit home to him [Mr Varadkar] that there are people out there with very little empathy who think we are out to get money and that we’re bringing down the screening programme,” she said.

“I have an issue with the management of the screening programme but not screening itself because screening saves lives. I want to see a programme we can trust. I don’t believe the current iteration of it is fit for purpose and it needs to be overhauled,” she said.

Ms Phelan said she was “frank and brutally honest” with the Taoiseach about how “harrowing a place the courtroom is”.

“I’ve been through the courts and it’s not a nice place to be. At the end of the day, harm was done to me and all the other women, yet we’re the ones having to stand up and justify why we’re looking for answers and we haven’t got answers,” she said. Her case was settled without admission of liability.

Ms Phelan said she had been told by Mr Varadkar that if mediation doesn’t work in settling cases taken by women and their families, “an alternative dispute resolution mechanism will be sculpted out. Judge [Charles] Meenan has been approached and will work on an alternative approach to what is currently happening in the case of Ruth Morrissey.

“I have been informed by the Taoiseach that the State Claims Agency have claimed that expert reports for Ruth were not ready and so an offer could not be made. Ruth’s legal team may well dispute these facts,” she said.

Ms Morrissey is the latest woman to take a case against two laboratories, Quest Diagnostics and Medlab Pathology, for allegedly incorrectly reporting her 2009 and 2012 smear test results. She is also suing the HSE for not telling her and her husband about the incorrect test results for years.

Ms Phelan also raised her concerns with the Taoiseach about the proposed Patient Safety Bill and the fact it does not include sanctions for individual healthcare practitioners, only healthcare providers.

“At the moment the fines are a joke – they’re €5,000-€7,000. Hospitals are paying fines every day so to me that is not a deterrent. This is not about sanctioning people. If there is a Bill there in place then it is hoped people will actually adhere to it rather than slapping people on the wrists,” she said.

Ms Phelan said she will be speaking to Minister for Health Simon Harris when he returns from holidays.