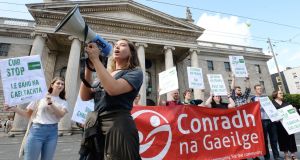 Siomha Ní Ruairc with fellow members of Conradh na Gaeilge outside the GPO protesting to ensure An Post will not end services through Irish in Gaeltacht areas. Photograph: Alan Betson

Post offices are the “last man standing” in rural Ireland, but they will disappear altogether unless the country’s oldest network of shops is modernised without delay.

So said Anna McHugh, head of corporate communications with An Post, after a leaked document revealed the imminent closure of up to 116 post offices, mostly in small villages in the northwest, midlands and southeast.

“Many of the post offices were put in place in the 1700s and 1800s, even before there were roads,” she told The Irish Times.

“The majority of them are seriously loss-making and it is no secret that we have far too many. We absolutely need to modernise and change our way of doing business.”

In April, An Post struck what it described as a breakthrough deal with the Irish Postmasters’ Union (IPU), which represents almost 1,000 postmasters.

As far as the IPU was concerned, it offered an attractive retirement package for many of its members whose main street shops, once the hub of their community, have become increasingly irrelevant in the perfect storm of technological advances and population shifts.

Postmasters are not employees of An Post; they are contracted to offer the service. They have to pay rent for their premises, for the light, heat, power, and staff costs – everything, except for a computer and a safe that are loaned to them from An Post – and all from a rapidly dwindling income.

That income is calculated every three years based on a points system which looks at everything from how many stamps they have sold to how many social welfare payments they handed over the counter. Both are declining transactions.

Postmasters also have no company pension, so when An Post dangled “exit packages” of up to €50,000 before those whose shops might only see a few customers some days of the week, it was a no-brainer.

For An Post, it was the kick-starting of its plan to overhaul the network for the first time in its history. It’s a plan it sees as a race against time to make sure there are still post offices in rural Ireland in 10-years’ time.

And while post offices remain the backbone of the social welfare payment system, paying 580,000 claimants every week, less than 10 per cent of new pensioners opt for traditional cash payments. A thriving economy has also seen unemployment allowances plunge.

“That is all chipping away,” said McHugh. “It is great for the economy, great for people, but it all means less transactions at the post office. That world is changing rapidly. It is happening very quickly.”

Last year, An Post chief executive David McRedmond suggested that about 360 post offices were no longer viable. Inevitably, they were mostly rural.

Despite fears that they would all be closed, An Post said it hopes the transfer of business from the 161 post offices where postmasters have sought voluntary retirement will effectively act as mergers and help sustain those that stay open.

The company has pledged that every community of 500 people will have a post office, and that in rural Ireland everybody will be within 15km of at least one.

In urban areas, 95 per cent of the population will be within 3km of at least one post office.

Allowing for 161 closures, there will still be 950 outlets.

McHugh said there are no current plans for further closures in the coming years “assuming business remains as it is”.

“We are very dependent on some big contracts that we have, but more closures is certainly not on the table as it stands.”

Post offices rubber-stamped for closure will shut over the coming months and all will have pulled down the shutters for the last time by January.

Twelve, where postmasters requested immediate retirement, are to close within the coming days including Quigley’s Point, Church Hill and Ballymagan in Donegal; Aghacashel and Aughavas in Leitrim; Ballindine in Mayo; and Desertserges and Shanballymore in Co Cork.

As part of the overhaul, An Post is pumping €50 million into the remaining post offices nationwide to give them “a modern look and feel”.

But their future will ultimately rely on the success, or otherwise, of a masterplan to reinvent the post office’s place in modern Irish society.

To tap into the massive shift towards online shopping, An Post wants post offices to become the go-to place to collect and drop parcels. New parcel lockers are to be installed in a move it hopes will attract more young customers.

It is also planning to become a “one-stop shop” for government and public services with an expansion into the likes of motor tax and driving licence applications, planning applications, fine payments and waste fees.

Furthermore, it is looking increasingly to take on the role of banks and other financial institutions which have pulled out of many communities, by offering current accounts and debit cards.

A change in opening hours is key. Some post offices still close at lunch time.

McHugh said the modern Irish post office could be opening “from 6am to 11pm” in some areas. “Because that is when people want to do their business – on their way into work, on their way home at night.”

But what about those people living on the periphery of the 15 km radius for rural post offices? Many customers are elderly and without private transport in areas with little to no public transport.

“They are travelling to buy their food,” said McHugh. “People have to travel to shops already in these areas. We are talking about a very reasonable distance in most cases.”

The closure of up to 161 post offices will see “slightly broader communities” in some cases, but it will ensure the post offices are still there in a few years time.

“As it is now, there is a serious threat and the biggest threat to rural Ireland is inaction or a notion that you can sustain the scenario of decades ago in this modern world,” she said.

“We are absolutely committed to rural communities; in most of those communities we are the last man standing.

“Even allowing for some closures we will still be in many of those communities the only financial institution and only national brand on those main streets.”