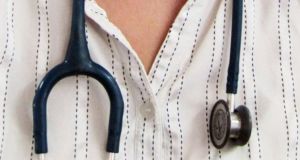 The Irish College of General Practitioners (ICGP) said it would ‘give appropriate consideration to the Government’s proposals for the repeal of the Eighth Amendment to the Constitution’. File photograph: Hugh Macknight/PA Wire

The organisation representing over 85 per cent of GPs in the State has said that if the Eighth Amendment is repealed it will draw up clinical guidelines where new legislation impacts on general practice.

Minister for Health Simon Harris introduced the Thirty-Sixth Amendment of the Constitution Bill 2018 in the Dáil on Friday, paving the way for the abortion referendum.

In a statement, the Irish College of General Practitioners (ICGP) said it would “give appropriate consideration to the Government’s proposals for the repeal of the Eighth Amendment to the Constitution”.

“Should the Eighth Amendment be repealed and legislation is enacted, the ICGP will draw up clinical guidelines where this legislation impacts on general practice,” it added.

The college, which is responsible for education, training and standards in general practice, has 4,156 members and associates, comprising over 85 per cent of practising GPs in the Republic.

The Institute of Obstetricians and Gynaecologists said it welcomed the provision of Government policy principles relating to proposed legislation if the Eighth Amendment is repealed following a referendum.

“The policy paper will provide a framework which the Institute can review to determine the implications for the practice of Obstetrics and Gynaecology in Ireland, ” it added.

About 200 consultant obstetricians and gynaecologists are members of the organisation.

Campaign group Midwives for Choice said on Friday it welcomed the principles published by the Government “to guide reproductive rights’ legislation in the event of repeal of the Eighth amendment”.

“They broadly reflect the recommendations of the Joint Committee on the Amendment of the Constitution, and as such pave the way for an Ireland where safety, dignity and respect for all pregnant women can come into being, whatever a woman’s choice,” the organisation said.

It said repeal of the amendment was “essential to bring Ireland into line with its human rights obligations in maternity care, which it is it currently falling well short of, in a system based not on individual need, but labour-ward throuput”.

“Access to informed consent and refusal only becomes meaningful in Ireland when the Eighth is repealed.

“We believe that the people of Ireland understand the need to trust women and allow healthcare matters to be decided in tandem with their healthcare providers, midwives being central to this. We look forward to the time when this can come into practice.”