‘You don’t have sex if you don’t want to be a mother’, former nurse says

A group of women have protested outside Dáil Eireann on International Women’s Day to tell Health Minister Simon Harris that the "8th amendment should continue to protect women from the abortion industry". 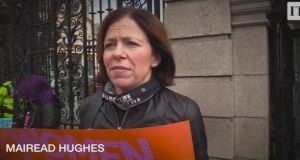 Mairéad Hughes, a campaigner with the Save the 8th group, said the Repeal campaign and the National Women’s Council of Ireland ‘does not represent us, does not speak for us’.

About two dozen women describing themselves as pro-life feminists protested outside Leinster House on Thursday as Minister for Health Simon Harris was unveiling the Government’s proposals for a referendum on the 8th amendment to the Constitution.

A queue of various groups awaited photo opportunities to mark International Women’s Day, among them the women opposing the repeal of the amendment that gives effect to the State’s almost total ban on abortion.

In a statement ahead of the event, the group said Mr Harris had to realise that “abortion is anti-woman and anti-child, and that he is not helping women by pushing abortion, but is instead failing to assure women that his government will provide the compassion, help and support women need to raise their children”.

“We are tired of being told that we can’t be feminists and be pro-life, when the fact is, according to the polls, women are actually just as likely or more likely to oppose abortion,” the statement said.

“Pro-life feminists are sick of being lectured to by abortion campaigners who like to tell women what they can and can’t say – but Irish women are independent-minded enough to stand up to the bullying of the abortion industry.”

Speaking outside Leinster House, Lucy McDonald said she was a nurse who had worked in a hospital in London where “hundreds” of abortions had taken place each week.

Asked if the women were not undergoing abortions by choice, Ms McDonald said: “Absolutely not. They are coerced by boyfriends, husbands, mothers, fathers – I’ve seen it all.”

‘Privilege of being mothers’

“I think us women have this wonderful privilege of being mothers.”

Asked if women should also be able to chose not to be mothers, she said: “Of course, but you don’t have sex if you don’t want to be a mother. That’s the scientific facts.”

Spokeswoman Mairéad Hughes, a campaigner with the Save the 8th group, said: “We’re here to support the rights of women. We are here also to say that the Repeal campaign and the National Women’s Council of Ireland does not represent us, does not speak for us. We think women deserve better than abortion.”

Asked if she believed it was possible to be a feminist and not to support the choices of other women in their lives, Ms Hughes said: “I am a pro-life feminist. I think strong women stand up for each other and stronger women stand up for others.”

She did not feel that women were making the right choice with abortion.

“If I’m in a position to give my opinion, I feel it is the wrong decision and there are better choices.”

Separately, the Unite trade union said a survey it published in November had highlighted the particular difficulties that working women have in not only travelling for an abortion, but accessing vital healthcare on their return.

There were 3,000 responses to the survey from members of the union.

“In addition to the financial cost involved, issues highlighted by respondents included lack of access to paid leave or sick leave, as well as pressure to return to work prematurely and the fear of victimisation,” the union said.

Regional women’s officer Taryn Trainor said that repeal of the Eighth Amendment, followed by appropriate legislation, was of “particular importance for working class women, as well as migrants and people with disabilities, who are precluded from travelling for financial or other reasons”.