Former President Mary McAleese has said that the reforming figure that she hoped Pope Francis would be, has not materialised. Video: Patsy McGarry 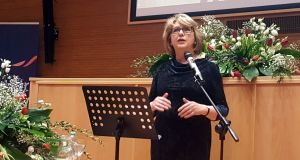 Archbishop of Dublin Diarmuid Martin has agreed with claims by Mary McAleese that the main reason for negative attitudes to the church in Ireland relates to its restrictions on women.

“Her challenge to the internal culture of the Church today was brutally stark. Some may find it unpleasant or unwelcome. I must accept the challenge with the humility of one who recognises her alienation,” Dr Martin said of the former president’s comments.

In the keynote address to a Voices of Faith conference in Rome on Thursday marking International Women’s Day Mary McAleese quoted the Archbishop.

“Just four months ago the Archbishop of Dublin Diarmuid Martin felt compelled to remark that “the low standing of women in the Catholic Church is the most significant reason for the feeling of alienation towards it in Ireland today,” she said.

In response, Dr Martin said he agreed. “Probably the most significant negative factor that influences attitudes to the church in today’s Ireland is the place of women in the church. I am not saying that just because of the comments in these days by President McAleese. Indeed, I was happy to note that President McAleese quoted that exact phrase of mine in her speech.”

Speaking at book launch in Dublin on Thursday night, Dr Martin said a second challenge to the Catholic Church in Ireland today was its attitude to young people. He recalled a survey of young people in one Dublin parish as “one of the most disappointing documents that I read since becoming archbishop.”

The young people felt unwelcome in their parishes, he noted. “I quote, without any comment and leave judgement to yourselves: ‘A number of young people noted that it was people in parishes (priests and parishioners) who were the greatest obstacles for young people getting involved’.”

Faith, he said, “is not a negative reaction or simple rejection of a changing world.”

In the past “the Church and the Irish Church in particular was a highly moralising Church. Jesus did not write an arid rulebook as an inspiration for his followers. Jesus did not think that belief in him could be attained through imposition,” he said.

“Faith in Jesus is no ideology. It is about a faith which enables each individual to attain robust gospel wisdom, a freedom to renounce security for ourselves in order to live for others as Jesus did and then finding joy and fulfilment in living the Gospel,” he said.

Church in the future “will have much less to do with management and structures. It will be about men and women who have the ability to speak the language of faith authentically in a world where that language may be alien and to speak in a way that attracts,” he said.

The Christian community will succeed “not through polemics and denunciations, but through living its life in a way which wins the respect, the goodwill and the confidence of ‘all the people’,” he said.