Points relevant if article 40.3.3 is removed with need for further scrutiny accepted 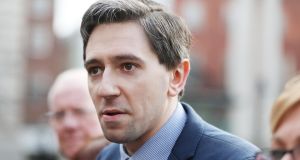 Minister for Health Simon Harris: will release a paper to coincide with the beginning of a Dáil debate on the looming referendum. Photograph: Niall Carson/PA

The Government will on Friday publish a paper committing to 21 policy principles, in the event the Eighth Amendment is repealed from the Constitution.

Minister for Health Simon Harris will release the paper to coincide with the beginning of a Dáil debate on the upcoming referendum.

The paper, which has been seen by The Irish Times, reminds people of the pathway to this juncture including the establishment of the Citizens’ Assembly and the Oireachtas committee on the Eighth Amendment.

It outlines the Government decision on January 29th to hold a referendum on article 40.3.3 of the Constitution before the end of May.

The paper, prepared by the Department of Health, says it is now a “matter for the Irish people to consider and determine by way of referendum whether to amend the Constitution”.

The policies contained within the paper are only relevant if article 40.3.3 of the Constitution is removed, it adds, and further scrutiny and further definition will be required.

The 21 principles or provisions, which would underpin the proposed legislation, are:

- Terminations to be provided on the grounds of risk to health, which includes the risk to life, of pregnant women;

- No distinction will be made between physical and mental health;

- Two doctors will be required to assess the appropriateness of a termination on the grounds of a risk to health;

- One medical practitioner can assess to terminate when there is an emergency risk to health;

- In the cases of a foetal condition which is likely to result in death before or shortly after birth, a termination can be provided;

- Two doctors will be required to assess the appropriateness of a termination in such cases (of fatal foetal abnormality);

- Terminations can be provided up to 12 weeks “without specific indication”;

- A time period will be required to elapse between the initial assessment by a medical practitioner and the termination of a pregnancy being carried out;

- Gestational limits will not apply in cases of a foetal condition or on grounds of risk to health;

- Termination of pregnancy should be certified by a medical practitioner;

- Termination of pregnancy should be notified to the Minister for Health by the appropriate medical practitioner;

- A formal review process can occur for a woman (to review a decision of her doctor) in certain defined circumstances;

- Conscientious objection will be allowed for;

- Nothing in legislation will interfere with a woman’s right to travel or seek information;

- The offence for the destruction of the unborn outside the law will remain;

- A woman who procures or seeks an abortion would not be guilty of an offence;

- An annual report will be provided;

- The Minister for Health would be provided with details of all appeals or reviews carried out;

- Consent must be given for an abortion; and

- The Protection of Life During Pregnancy Act will be repealed.

The heads of a Bill will be published by the end of March, alongside a number of commitments from the Minister for Health to introduce reforms to sexual education in schools and access to contraception.

Mr Harris will also commit to improving services for those in crisis pregnancies, in line with the Oireachtas committee recommendations.

The Dáil will on Friday begin its debate on the Referendum Bill providing for a referendum at the end of May.

The House will rise for a week and it will be considered again on March 20th.