Visa renewals: ‘The process is tedious and frustrating’ 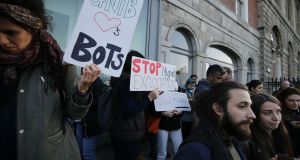 Eric Westphal spent much of November trying to secure an online appointment to renew his visa at the Irish Naturalisation and Immigration Bureau office in Dublin. Photograph: Nick Bradshaw/The Irish Times

When Eric Westphal’s Garda National Immigration Bureau (GNIB) card expires next month there is a strong chance he will not have received his Irish Residence Permit in time to replace it.

Westphal, who has lived in Ireland for 12 years, spent much of November trying to secure an online appointment to renew his visa at the Irish Naturalisation and Immigration Bureau (INIS) office in Dublin.

When he last renewed his visa he spent hours queuing outside the Burgh Quay building. Five years on, the system was even more complicated.

Westphal turned to the Americans in Ireland Facebook group for advice on his issue and found that dozens of others were similarly struggling.

“Sadly the only way I was able to get [a booking] was by paying a bot company €30. Everybody I’ve spoken to online said they’re going past their renewal date. I found an appointment but it’s 10 days after my expiration date,” he said.

Westphal is among a growing cohort of people now paying a third-party operator between €20 and €40 for what should be a free appointment, after failing to secure a slot through the official channels.

The Department of Justice has advised people not to share sensitive data with unregulated websites. However, the lack of appointments available through the INIS leaves people with little choice but to hand over their personal details, such as passport numbers.

The unofficial operators say they are not violating the GDPR (General Data Protection Regulation) and that all data is deleted once an appointment is secured.

Many of those interviewed about the issue asked to remain anonymous for fear that their complaints would negatively affect their immigration status.

A Dublin-based computer scientist said he contacted the department with a business proposal on how to resolve the block booking issue after spending months trying to get a visa appointment. He has not received a response.

“Foreigners in Ireland are at serious risk of being subject to data theft. I had to give all my personal details to a person who could be in Ireland or China. But I had to trust him because if I don’t get an appointment I’ll lose my job,” he said.

The department last December said the online booking system would be replaced this year following a tender process. Asked why this has not happened, a spokesman said it would shortly tender for a replacement system “which will be designed to prevent the block-booking of appointments”.

An American woman who moved to Ireland during the summer said she paid an official relocation service to secure an appointment. She considered paying an unofficial operator but worried about identity theft and chose to approach the Dwellworks relocation support organisation – a service often used by employees of multinational companies.

After initially receiving a €499 quote for for relocation services, she said Dwellworks offered to secure her a visa appointment for €75. A Dwellworks spokeswoman said the company, which usually charges around €110 to secure an INIS appointment, has also encountered difficulties finding slots for clients.

While thousands of people in Dublin continue to be affected by online delays, applicants in Cork are spending hours queueing, reminiscent of the problem that existed at Burgh Quay.

A woman named Mary*, from Australia, recently spent five hours waiting to be seen at Anglesea Street Garda station in Cork. As she had previously registered her son she did not take him to the appointment but was told to return and queue up again with her five-year-old.

“There are people in worse situations than me, the risk of deportation is much more stressful,” she said.

A Garda spokesman said the force was aware of a backlog of registrations at the Cork immigration office and that there had been a “significant increase in activity” in September and October. Additional gardaí have been allocated to immigration duties at Anglesea Street while more gardaí are being trained in this area, he said.

Jay Roszman, originally from the US, also had to return to the garda station a second time after failing to present his marriage licence.

“The process is tedious and frustrating,” he said.

*This article was amended on February 3rd, 2019