Archbishop speaks of 'darker side of Church life' 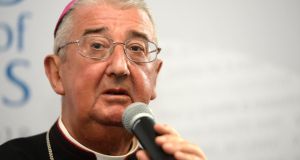 Archbishop Diarmuid Martin: “Perhaps the most significant example in our times has been the change in attitude to protection of the environment and climate justice.” Photograph: Dara Mac Donaill / The Irish Times

The social teaching of the Catholic Church must be in touch with reality, Archbishop of Dublin Diarmuid Martin has said. “It is, however, not an ideology. Neither is it a political or economic platform. The Gospels do not provide readymade answers to the ongoing challenges of a complex world. To affirm otherwise would be fundamentalism,” he said.

“The Gospel message must be mediated within an ethical framework and become a challenge to people of good will to respond,” he said.

Archbishop Martin was speaking in St Patrick’s College Maynooth on Tuesday evening where he delivered the Trócaire Lecture 2019 on the theme “At the Service of Justice and Peace”.

One of the encouraging new factors emerging in today’s world was that of international public opinion, he said. “It is important to remember how public opinion was an influencing factor in the fight against slavery, against child labour and today against human trafficking.

“Perhaps the most significant example in our times has been the change in attitude to protection of the environment and climate justice.”

It meant “governments are being driven by their own citizens to take up more enlightened positions. We see this week how even schoolchildren are setting the pace.”

It was, he said, “worth noting that it was forerunners who rose above the prejudice of their own communities, who led people to the Northern Ireland peace process and who showed that peace was possible. The current deadlock says something about the state of politics in Ireland.”

Organisations like Trócaire can be to the forefront of international campaigns “which influence national and international public opinion and show how ethical concerns belong to the real world and that politics and pragmatism can be forced to listen,” he said.

As to why many of the themes that concern the international community kept coming back unresolved, he felt that “to a great extent” this was due to “the absence of a moral consensus.”

What the world needed today were “modern day Marshall Plan style programmes of investment in developing countries.” As a matter of urgency, these should also establish “governance in favour of the people, which is part of a culture that embraces sustainable peace.”

Migration, he said, “will always be an intrinsic dimension of a global economy and society.” It was “not just a social or legal problem. It is about people. It is about real people.” He believed “the way we treat migrants and especially refugees is a barometer of our humanity.”

Reflecting on his own years in Rome he said “working at the Vatican is an unusual experience. I met there some of the most intelligent, committed and enlightened men and women dedicated to the service of the Church.”

But he also “saw the darker and sadder side of Church life in a culture of careerism and nastiness. Cardinal Etchegaray and his successor with whom I also worked, Cardinal Van Thuan, who had been in prison for 13 years in Vietnam, both belonged unmistakably to that first category and I am deeply indebted to both of them,” he said