US passengers fly into Dublin: ‘I’m here for six days. I guess I’ll have to stay inside’ 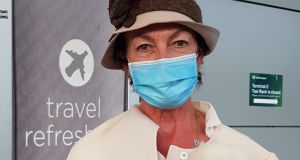 Marie Hijaci at Dublin Airport: she is visiting a brother in Galway who is unwell but will have to spend the majority of her time here in quarantine. Photograph: Patsy McGarry

Three Aer Lingus flights from the United States arrived in Dublin Airport on Sunday morning with almost unseemly haste. One from New York’s JFK landed at 4.15am, one from Boston at 4.31am, and the other from Chicago at 5.15am.

All were earlier than scheduled, and a short time later they brought some semblance of activity to the cavernous and empty Terminal 2.

Among those disembarking from the JFK flight were Helen Maxwell and husband Thomas Finetto.

She was “originally from Northern Ireland” though born in Belgium. “We’ve come home because I’m pregnant and we’re living in New York and we want to have the baby here and be close to Mum and Dad in Belfast. ”

They have been in the US two years. “Like Helen said, with the new baby coming we wanted our parents to be able to travel freely between here and the US.” Baby is due in January. She works “as a product manager for iHeartRadio” while he is “a social media manager”.

Things in New York are “not as bad as they were but who knows? They’re opening up now”, said Helen. Both planned to quarantine for 14 days in Belfast.

Cavan man Patrick Pierson, from Lough Gowna, has been in the US for 32 years. He is back for a funeral. “My uncle died yesterday, lung cancer. An uncle that lived in Dublin died two months ago, same thing. Mulhuddart. ”

On the street outside was Catherine Everitt, from Mexico. “Born and raised in Mexico and the US. My dad’s from Ireland, so I’m relocating here. I’m moving back for good. From [Washington] DC, to Drogheda. It’s better than Mexico or the States. I’m glad to be home.”

Beverley Prince was pushing her mother Benita Harman in a wheelchair. They had flown from Boston. “I live in Boston, originally from the Caribbean. I am visiting family. Heading to Northern Ireland, Lisburn. My son said I have to do the two weeks at home, quarantine. In Lisburn. We are staying until August. My son just had a new baby so we are here.”

In Boston “there’s a lot of protests. Like every weekend there’s a protest, Black Lives Matter. About the virus, people are following rules, everybody is wearing masks. There’s no protests about that over there, which is good.”

Originally from St Lucia, Beverly has been in the US for 22 years while Benita “just came this year to stay”.

Cindy Lamumba is from Virginia and flew from Boston. “I’m staying here on holiday for a little bit. I’m going to quarantine at a hotel, just me.” She is staying at a Hilton in Dublin. “Altogether I’m going to stay six days, just about a week. I’m going to have to stay inside, I guess. I have friends here. I have family members here. They’ll meet me.” Her holiday was already arranged and paid for before Covid-19 “ so it was like do I want to rebook?”

Marie Hijaci, “I’m actually Marie Moran”, travelled from San Diego, California via Chicago. “I’m going to Galway because I have a brother who is not feeling very well in hospital.” She is “home for 15 days and will spend most of it in quarantine, that’s part of the deal. That’s fine. They’re the rules and we have to get rid of this virus. It’s a serious issue.”

Originally from Elphin, Co Roscommon, she has been “I hate to tell you, 35 years” in the US where, as “a housewife”, she says “I play golf”.

San Diego was “actually okay because people are adhering to the rules and the governor of California Gavin Newsom is very strict”.

“But still in LA it has got a little bit out of control again. All the big cities. Miami is horrible, Dallas, Texas, the whole of Texas. But you have 350 million people to organise. It’s very serious stuff.”

David Reilly, from Tralee, flew from Chicago and has been working for the Kerry Group in the US for the past two years. “I’m relocating back to Ireland, basically. So I’m doing the quarantine for 14 days in Kerry. I’ve booked an apartment basically to quarantine for two weeks there, in Tralee.”

He was “supposed to be out there until November”. Living in Wisconsin, “things weren’t too bad but they’re starting to spike there a bit right now. I think last week they had the most cases in a single day, so it looks like it’s getting a little worse there”.

The US in general was not “handling it as well as, say, Ireland is. It’s not as strict. There were protests while I was there too, about the lockdown. People were protesting that they wanted businesses to reopen and then the Black Lives Matter as well.” His family lives in Tralee “but I won’t be going to see them till I finish my 14 days”.

Niall Jackman and fiancée Lydia Lefter are back from Delray Beach, Florida, “about half an hour north of Miami”. He is “a graphic designer for a publishing company. They’re keeping me going while I’m back over here”.

He had “only been there nine months. She’s [Lydia] been there over a year, a year and a half.” As to whether they were home for good “we’re not sure yet. So far it’s for good but things change. We don’t know.”

They planned to quarantine in their native Waterford. “We managed to rent a house, so it’s not all bad. Originally from Ballygunnar. We’ll be somewhere close,” he said.

Lydia is “from Moldova originally but I’ve been living in Ireland since I was 12”. The couple met in Ireland. “We worked for the same company in Delray, Palm Beach County. Grew up in Waterford. That’s exactly what we’re doing, waiting this out,” she said. At the moment “Florida is insane. Everybody wants freedom and rights. It’s ridiculous.”

Niall said “there’s the handful of people that care and then the others that don’t. You’d feel sorry for the people who are putting in the effort”.

There to meet the couple were Niall’s parents, David and Marian. They drove up in two cars, one of which the younger couple will drive back to Waterford.

Niall’s father said he was “glad to have them home, absolutely. It’s nerve wracking. You just don’t know where this is going to end, do you! Our eldest son is living in Waterford and our daughter is actually living with us at home. We only have three and they’re all home. That’s what it’s all about, isn’t it, family? Keep the family safe. It says a lot for good Irish values!”