‘There is one question in the minds of the family, could we not have them back?’ 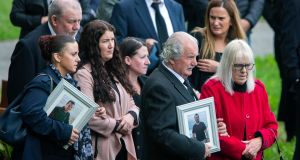 Parents, Séamus and Dinah, and other family members at the joint funeral of brothers, Fergus and Philip Brophy, who died in a scuba diving accident in Tipperary last Sunday. Photograph: Colin Keegan, Collins Dublin 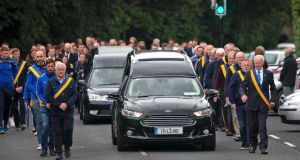 The deaths of Laois brothers Fergus and Philip Brophy, who drowned in a diving incident in Co Tipperary last weekend, has left a “deep void” in the lives of their families, their funeral has heard.

The joint funeral of Fergus (43) and his younger brother Philip (34) took place at St John’s Church in Killenard on Thursday. The brothers, originally from Portarlington, died following a scuba diving accident at Portroe quarry on Sunday. Fr Tom Dooley, parish priest at Portarlington, said their “great passion” was sub aqua diving and that they were “dive masters”. He said the local community was “shocked and saddened” to hear of their deaths.

“Their tragic deaths has created a deep void in the lives of Séamus and Dinah, their parents, and in the life of Michelle, Fergus’s wife, in the lives of their brothers and sisters, uncles and aunts and the extended family and friends.

“All of us have questions, why did this happen but there is one question in the minds of the family, could we not have them back?

“Could these unbelievable things be wiped out? Could we be awakened from this nightmare that overwhelms us? And there are no easy answers to these questions.”

Fr Dooley said both men excelled in their studies and in their places of work.

“Both loved sport and played football here with O’Dempseys [GAA club], were loyal supporters of the Laois team. They loved to compete, even compete against each other,” he added. He said sub aqua diving had brought them all over the world, to “exotic places like Malta, Mexico, Brazil and Egypt”. A particular highlight for the family was Philip winning a gold medal at an Ironman competition in Nice, France.

“Today, instead of thinking what might be, let us think more of their achievements and their accomplishments,” he said.

Offertory gifts included a Leinster rugby jersey, a Laois GAA jersey, a jersey from their local GAA club O’Dempseys, a set of darts and a toy tractor.

It is understood the two men travelled to Portroe Dive Centre, which is located at the quarry, to try out a new underwater scooter. However, both drowned after one tried to help the other when they got into difficulty in the 40m deep water.

The siblings were frequent visitors to Portroe Quarry where divers from all over the country and beyond come to train and hone their diving skills, as well as explore a number of sunken wrecks.

A major emergency operation swung into play at the quarry on Sunday afternoon involving search and rescue groups, Killaloe Coast Guard, gardaí and paramedics. Efforts by rescue personnel to revive the brothers were unsuccessful and their bodies were transferred to University Hospital Limerick for postmortems.