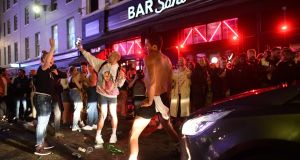 Revellers drinking in the Soho area of London as restrictions are further eased during the coronavirus pandemic. Photograph: Justin Tallis, AFP via Getty 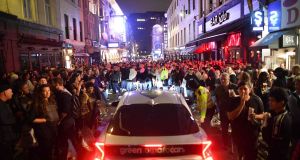 Fears that emergency services would be overwhelmed after pubs and restaurants reopened in England have not materialised, according to initial reports.

Ahead of pubs opening for the first time since March 23rd, NHS England told hospitals and ambulance services that demand for care was likely to reach “that of New Year’s Eve”. Police forces deployed extra patrols.

Early indications, however, were that criminality and the number of A&E admissions as a result of alcohol were not as widespread as many had anticipated, although there were small pockets of disorder.

John Apter, chairman of the Police Federation, was on shift in Southampton where he said he dealt with “naked men, happy drunks, angry drunks, fights and more angry drunks”.

“What was crystal clear is that drunk people can’t/won’t socially distance,” he said. “It was a busy night but the shift managed to cope. I know other areas have had issues with officers being assaulted.”

Rafal Liszewski, a store manager at Clonezone on Old Compton Street, said crowds began to arrive from about 1pm on Saturday. “By 8-9pm it was a proper street party with people dancing and drinking,” he told PA Media. “Barely anyone was wearing masks and nobody respected social distancing...to be honest, with that many people on one street it was physically impossible.”

The Met police commander, Bas Javid, said a small number of pubs in London closed early after advice from officers because of crowding and social distancing issues.

“The majority of the public complied with social distancing guidelines and remained vigilant,” he said. “While some areas were notably busy such as Soho and Portobello Road, we are pleased there were no significant issues or incidents in the capital.”

Devon and Cornwall police said they had logged 1,000 calls by 10pm on Saturday, mainly linked to drink-related disorder and anti-social behaviour.

In north Nottinghamshire, five pubs closed early after alcohol-related anti-social behaviour and 12 people were arrested, the local force said, adding that there had been no major incidents and most people had enjoyed themselves responsibly.

Simon Stevens, head of the NHS, told BBC One’s Andrew Marr Show on Sunday: “Pleasingly, we did not see last night the kind of scenes that people feared. The foolish few but the sensible majority is I think the story across the country, and long may that continue.”

The health secretary, Matt Hancock, said most people were “doing the right thing” and social distancing on Saturday night. “Well, I think that from what I’ve seen, although there’s some pictures to the contrary, very, very largely people have acted responsibly,” he told Sky’s Ridge on Sunday.

“So overall I’m pleased with what happened yesterday. It was really good to see people out and about and largely, very largely, social distancing.”

Mr Hancock said action would have been taken if the rules had been broken and the government would not “shirk from bringing in more drastic measures if that is what’s needed to control the virus”. – Guardian