Proposals would have ‘devastating’ effect on elderly and disabled, NBRU says 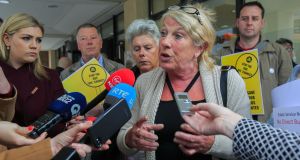 Theresa Kelly from Edenmore Residents’ Association outside the National Transport Authority headquarters where petitions against some of the BusConnects plans were handed in. Photograph: Gareth Chaney Collins

At least 40 per cent of the current Dublin Bus network would be retained under a submission made by the National Bus and Rail Union (NBRU) to the BusConnects consultation.

In a submission seen by The Irish Times, the NBRU said the changes proposed in the BusConnects plan would have a “devastating” effect on the elderly, on mobility challenged citizens, on those with disabilities and on families with young babies.

It notes that significant interchange is central to the plan and says “commuters will not accept this concept”.

The union also adds that access to the new National Children’s Hospital at St James’s Hospital is “very poor” for such a large national infrastructure project. “None of the new high-frequency spines connect with it.”

About 20,140 submissions have been received by the National Transport Authority (NTA) in relation to the redesign of the network. The period of public consultation closed on Friday.

The authority had expected to publish the final network design in January but said this would be delayed until later in the first quarter of next year due to the volume of submissions received.

In its submission, the bus workers’ union said the establishment of the Public Transport Stakeholders’ Forum which Minister for Transport Shane Ross had committed to two years ago would have assisted in reducing concern among communities about the proposals.

Route by route, the NBRU highlights what it believes will be the impact on local communities of the changes to the service and makes suggestions for alterations. “It is our strong contention that the proposed orbital routes should be re-examined with a view to establishing if they could be incorporated into and aligned with the existing network,” the submission states.

Among the suggestions for changes, the NBRU says the proposed N4 route under BusConnects needs to be redirected to take in Connolly Hospital Blanchardstown.

The union also notes that Google staff who work in Barrow Street may currently take the number 1 bus direct to Santry. “The same trip under BusConnects will require three buses. This could influence foreign direct investment into Ireland,” the union claims.

Among the main proposals from the union are an increase in frequency on high-speed spines to match current network frequency, and alternative proposals for new or replacement routes where existing ones are to be withdrawn.

The union says hospitals and schools should retain services.

On Friday, a number of residents’ groups and local councillors went to the offices of the National Transport Authority in Dublin to hand in petitions against some of the BusConnects plans for their areas.

Theresa Kelly of Edenmore Residents’ Association said the loss of its bus route would mean the danger of “isolating the most vulnerable in our areas”. She said one local woman had a child with Down syndrome who had been trained to use a bus to get from work to home.

“It’s after taking two years to train him. If this comes in, he has to be retrained but he’s in his 30s. How long more is it going to take to retrain him?”

Ms Kelly claimed there had been no impact assessment carried out on the plan and that the consultants had not gone directly into communities to ask how the proposals would affect them. “So before they do anything, they should take the needs of the people in every area into consideration. There is some good points on it, where you can get from A to B. But there’s some very bad ones on it,” she said.