‘Working-class people have become so dehumanised by this drug’ 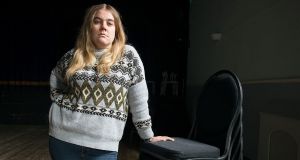 Grace Dyas: her play, “Heroin”, co-written with Rachael Keogh, portrays drug use in Dublin since the 1970s. Photograph: Dave Meehan

The criminalisation of heroin addicts over the past 60 years has been a “slow class genocide”, according to the co-author and director of a play on the subject opening in Dublin this week.

Grace Dyas (29), who grew up in Rialto, Dublin, in the early 1990s, co-wrote Heroin in 2010 with Rachael Keogh – from Ballymun, survivor of heroin addiction and author of the grimly compelling 2009 book, Dying To Survive.

Dyas describes finding syringes in her front garden, and watching from her bedroom window as people injected heroin in the lane behind her family home.

“I was fascinated by them. It was like being in some kind of zombie movie sometimes. I’d ask my mam and dad, ‘What is wrong with them?’ and they’d always say, ‘They’re just not well. They’re sick.’ So that is what I learned. My values growing up were that addiction was a health issue. I got a rude awakening.”

She was “really shocked” in her late teens and early 20s to hear colleagues in a shop she was working in say, “these people should be shot”, and to realise “how much hate there is against drug users”.

The point of Heroin, says Dyas, was to “to look at how this whole group of mainly working-class people have become so dehumanised by this drug”.

In the original production, which won the Spirit of the Fringe award in the 2010 Dublin Fringe festival and has since toured Europe, the impact of the heroin epidemic from the 1960s through to the 2000s on the residents of an inner-city flats complex is explored.

It humanly though viscerally portrays the damage of a seemingly endless, intergenerational cycle of addiction and despair.

This new production, with a new cast, is more hopeful, says Keogh.

Reared by her grandparents after her mother left when she was seven, Keogh started taking drugs at 11, smoking heroin at 13 and was soon injecting. She faced death and did such damage to her arms she almost had to have them amputated. Her book, she points out, is more about addiction than drugs – her figuring herself out, accepting herself and “taking responsibility for my actions, as best I could”.

Her view, as to where the responsibility for thousands of mainly working-class, young people’s drug addiction lies, has changed somewhat since. She looks back – at how she was repeatedly imprisoned, first at 15, for shop-lifting and “exposed to terrible violence” in prison; how she could not access treatment, how she felt “of no value”.

“Those experiences didn’t make me use drugs, but they exacerbated my illness. No one sets out to become addicted. They start drugs for a bit of fun. But heroin is such a powerful drug – becoming addicted is not a choice.”

Dyas and Keogh want this production to “change the world”. It calls for the decriminalisation of drug possession, a measure under government consideration.

“This substance [heroin] creates consequences in people’s behaviour that are threatening to society at large. That allows people to hate, dehumanise and criminalise them,” says Dyas. “If you are in Foxrock or Ranelagh or some middle-class area you can buy treatment. If you are working-class, all that’s offered is prison or methadone. There are only 30 detox beds in this country. What we have had has been a slow class genocide.

“Decriminalisation would create a social consciousness that will see drugs as a health issue, which will begin a debate about recovery. Recovery is powerful. It could really shift things. That empowers people and that frightens people.”

Heroin opens in the O’Reilly Theatre, Dublin, on Tuesday, September 25th, for three nights. It plays in the Glens Centre, Manorhamilton, Co Leitrim, on Saturday 29th for one night