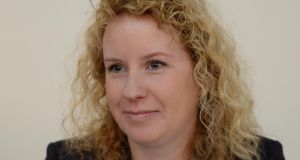 Rosalind Carroll, director of the Residential Tenancies Board: “A good number of landlords are complying with legislation but it’s about trying to target those that aren’t.” Photograph: Brenda Fitzsimons

A rent register is urgently needed to stop certain landlords from “knowingly contravening the law” and to slow down soaring rental prices, the head of the Residential Tenancies Board (RTB) has said.

Rosalind Carroll, director of the RTB, said that while 340,000 landlords registered with it were currently complying with regulations, some property owners would continue to overstep the law by raising rents above legislated levels in the absence of greater transparency.

Ms Carroll said she hoped enforcement powers the RTB expects to receive under new legislation by the end of the year would enable the board to fully monitor the 4 per cent cap on increases in rent pressure zones and other controls. She said many tenants still do not understand the rent pressure zone system introduced almost two years ago.

“We want to create a platform so that people understand these changes. A good number of landlords are complying with legislation but it’s about trying to target those that aren’t. There are people knowingly contravening the law.”

John-Mark McCafferty, chief executive of housing charity Threshold, said a rent register similar to the residential property price register could be introduced as a means of tracking rental compliance.

“The transparent register is absolutely key,” Mr McCafferty said. “We need cold hard facts and an enforcement regime so that landlords think twice because there’s a high likelihood they will be found out. Without that it’s the tenant’s word against the landlord.”

A spokesman for the Data Protection Commission said the creation of a publicly available register containing personal details of individuals would invariably attract scrutiny under data protection law.

Mr McCafferty said some landlords were purposely contravening the 4 per cent cap but that others might genuinely misunderstand that when they rent their property to a new tenant the rules on raising prices still apply.

“Some assume that once a tenant leaves they can crank up the rent with the new tenants.”

New data released this week shows the cost of renting a home across the State is €1,094, an increase of nearly €80 in 12 months. The figures, which draw a distinction for the first time between the cost of renewing existing tenancies and signing new tenancies, found that the average monthly rent for new tenancies was €1,183 compared with €930 for renewals.

Niamh Randall from the Simon Communities warned that the latest data did not include “top-ups” and other informal arrangements.

The Irish Property Owners’ Association (IPOA) expressed concern that rent pressure zones had “disadvantaged substantially landlords that rewarded their good tenants by keeping their rents low” and that when tenants left their accommodation there was an “unfair restriction on the rental amount that can be charged”.