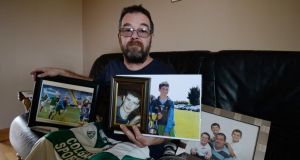 Michael Gorman, holding pictures of his son Craig, in Portlaoise, who took his own life in 2014 despite being high priority on a waiting list for support by Tusla. Another son, Aaron, died of a suspected overdose in 2019. Photograph: Alan Betson/The Irish Times

Shortly before noon on March 24th, 2014, Craig Kelly-Gorman was sitting in the livingroom of a family friend’s home in Portlaoise.

Craig lived nearby with his father and two younger brothers, and at 15 looked older than his age, with the stubbly hint of a moustache.

The family friend, John Timmons, made Craig a cup of tea while the pair chatted. A little before 12.30pm Mr Timmons began to cook the two of them a fry. At an inquest he would later state Craig had recently been “hit very hard” by the death of a friend.

Carrying the food in to Craig in the front room, he struggled to open the door, dropping the plate to push against it. It was then he realised something had happened to Craig inside.

Michael Gorman, Craig’s father, was shopping in Dunnes Stores on Mountmellick Road when he got the phone call. Rushing to the scene he arrived 10 minutes later to find his son unconscious in the house.

He started performing CPR and did not stop until an ambulance arrived, which took Craig to Portlaoise General Hospital, where he remained on life support for two days before he died.

The next day, Fergal McDonald, a principal social worker in the Laois-Offaly area for Tusla, the child and family agency, drafted a “confidential need-to-know notification” for senior officials.

Tusla had received “a number of reports in the past year” about Craig, and his case “was open and on a waiting list for initial assessment” at the time of his suicide, Mr McDonald wrote. The notice was sent to Fred McBride, then Tusla chief operations officer, who would later go on to lead the agency.

A confidential internal Tusla review, completed in November 2014 and seen by The Irish Times, reveals Craig’s “high priority” case was left unallocated, without assessment for more than a year before his death.

There was a repeated failure to follow up on nearly a dozen referrals about the family over a 15-month period before the teen’s suicide.

“A number of referrals were received in relation to Craig and his two siblings in 2013, but no initial assessment had taken place for these and subsequent referrals received in 2014,” the review found.

The family first came to the attention of social services in 1999 when Craig was a little over a year old.

There were several referrals and visits by social workers over issues between Craig’s parents, with the file twice closed in 2001 and 2008, at which point the three children were living with their father.

On January 22nd, 2013, Mr Gorman contacted the social work department and reported that Craig – then aged 14 – was not attending school, and was drinking alcohol and smoking.

Three days later one of his younger siblings presented at Portlaoise Hospital emergency department with a number of cuts on his arm saying he wanted to die. The review stated that an initial assessment of these referrals – required within 20 days – did not take place.

After assessment a case may be allocated to a social worker, and at this stage the cases of Craig and his two siblings were unallocated.

There is a record of two social workers meeting Mr Gorman the following month in the hospital paediatric ward, and promising him support, the review said.

The social work department received further reports that one of the younger siblings was hospitalised for alcohol consumption, and had run away from home. The review notes in each instance initial assessments were required, but did not take place.

On April 27th, 2013, a social work team leader examined Craig’s file and noted it was “considered high priority for follow-up”.

The review states that “due to staff shortages and high volume of referrals, it was not possible to allocate the file” to a social worker. It was placed on a waiting list for assessment “as soon as possible”. There had been several requests for extra staff in the area as a matter of “urgency”, the review said.

Tusla’s records noted in June 2013 that the family required possible support services as Mr Gorman was parenting alone, but the “file remains on high-priority waitlist”.

That December the social work department received a report from a child psychiatrist to say Craig had missed 30 days of school in the last three months.

On January 9th, 2014, an education welfare officer, appointed over the children’s poor school attendance, made a referral to Tusla stating Mr Gorman “was finding it difficult to track where the boys are and would be grateful for some support”. The review notes yet again an initial assessment was required, but did not take place.

Later that month the local department of child psychiatry contacted Tusla about “how to best support the family”.

Craig had attended Child and Adolescent Mental Health Services two weeks before his death, but “no concerns were noted in respect of suicidal ideation”, the review states.

Tusla’s internal review concluded there had been “11 notifications on this family to the social work department from the 22nd January 2013 to 17th January 2014”.

Everybody got on with him, and he got on with everybody. He’d bend over backwards to help. He was well liked by everybody, young and old

“There is no evidence that any of these notifications had an initial assessment and in turn no further assessment,” it said.

The review recommended that a wider inquiry examine the area’s waiting list of unallocated cases, and that initial assessments take place within the 20-day timeframe.

Mr Gorman is today highly critical of Tusla, who he said had been “useless” and had not done enough to support the family. When questioned on Craig’s death, a spokesman for Tusla said the agency could not comment on individual cases.

Craig was a “very outgoing” teenager, his father told The Irish Times. “He was mad into his hurling, he played on the primary school team,” Mr Gorman says.

“Everybody got on with him, and he got on with everybody. He’d bend over backwards to help. He was well liked by everybody, young and old,” he says.

Big for his age, Craig would often help his father at work in the construction trade.

He was the type who would stick up for other young people in the area. “If there was any bullying in other estates, he’d be the guy to sort it out,” Mr Gorman says.

Craig’s mother, Fiona Kelly, described him as a “big-hearted” young lad. “He’d be there for anybody, he is missed,” she told The Irish Times.

Life after Craig’s death was “rough” for the family. “It killed Aaron,” Mr Gorman continues.

Aaron Kelly-Gorman, one of Craig’s younger brothers, died in June 2019 from a suspected drug overdose aged 18. Mr Gorman had found him unresponsive on the couch, and for the second time desperately performed CPR on one of his sons, to no avail.

Brandon Kelly-Gorman (18), the last of the three brothers, said the deaths of his siblings were “a kick in the teeth”. When Craig died Brandon was 12, and the funeral was one of the toughest days of his life. “It was tough, you have to get through it,” he says.

Shortcomings in how Tusla responded to Craig’s case were part of a wider systems failure, and the teenager’s case was one among a backlog of hundreds in Laois-Offaly at the time.

The agency was thrown into a major controversy when the significant backlog of unallocated cases came to light in April 2015. An unpublished independent review later found the “crisis in Laois was part of an organisational failure”.

The Tusla midlands area, which covers Laois-Offaly, has seen improvement in recent years, and is now among one of the better-performing services areas. Latest Tusla figures up to October 2020 showed the area had 118 unallocated cases, a drop from 255 unallocated cases in October 2019.

Clearing the backlog of unallocated cases began in 2015 under a rapid service improvement plan. For Craig Kelly-Gorman, that was too late.

If you are affected by any issues raised, support is available through your GP, from Pieta House at freephone 1800 247247 or the Samaritans by emailing jo@samaritans.ie or telephoning 116123 for free. Tusla says anyone concerned about the wellbeing of a child should contact their local social work office tusla.ie/get-in-touch