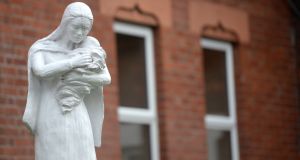 The Regina Coeli hostel on North Brunswick Street in Dublin was among the institutions investigated by the commission of investigation into mother and baby homes. Photograph: Dara Mac Dónaill

The standards that applied to clinical trials involving human subjects in the period, included the 1947 Nuremberg code, drawn up by the US judges who sat in judgment of Nazi camp doctors.

“The voluntary consent of the human subject is absolutely essential,” according to the code, which is quoted in the commission’s report.

The Declaration of Helsinki, of 1964, said that consent should, as a rule, be obtained in writing, and that if a person is not legally competent, then the consent of his or her guardian should be procured.

In the case of children in Irish mother and baby homes whose mothers were not contactable, the legal guardian may have been the authorities in the institution, or the local health authority, the commission said in its report.

However, precisely who the guardian was in such instances is “largely irrelevant as no attempt seems to have been made to seek the consent of parents or guardians”.

The commission investigated seven vaccine trials that came within its remit. One was part of a public-health campaign in the 1930s against diphtheria, a disease that affected 2,991 Dublin children in the 1933-1935 period, killing 277 of them.

While the wider trial was probably in compliance with the standards of the time as no schoolchild was vaccinated without written parental consent, this was not so with the children in the institutions.

“Children living in institutions were routinely used as research subjects in vaccine trials in the United Kingdom, the United States, and several other jurisdictions at this time,” the commission noted.

But as time moved on, the Republic appears to have slipped behind developments in the UK. In 1960-1961, the Wellcome Foundation in the UK conducted a vaccine trial in Ireland that involved 58 infants in six institutions.

There was “no evidence” that consent was sought or received, the commission said.

Reports from the time involving Wellcome scientists in the UK suggest that getting consent for the participation in vaccine trials of children in institutions in the UK by this time was “common practice”, according to the commission.

A report on a Wellcome vaccine trial in Nigeria in 1960 involving 90 children stated that “parental consent for vaccination was received for each child”, the commission noted.