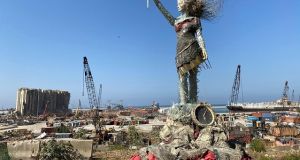 Artist Hayat Nazer collected broken glass and twisted materials that belonged to people’s homes before the Beirut explosion to create a statue of a woman raising Lebanon’s flag, her hair and dress flowing in the wind, symbolising the city’s hopes of rising from the rubble and a new beginning. Photograph: Courtesy of Hayat Nazer

As we take one last backward glance at Christmas, mingled with our disappointments is the hope that next year’s festival will literally be “business as usual”.

The year ended has been difficult and remains so for those whose livelihoods have been affected and especially those with families to provide for and mortgages or rents to cover.

Much attention has been given to the needs of those of us who are older, and that is appreciated, but there needs to be a watchfulness for others who are knee deep in anxiety about the future.

We often complain about the hustle and bustle of the traditional Christmas season, with some especially concerned at the commercialisation of what is essentially a religious festival.

This year reminds us that it is all part of a piece where people find meaning and blessing at different levels.

The onetime Archbishop of Canterbury Dr Robert Runcie knew that when he wrote: “I am frankly rather tired of the tendency of Christians to berate the world for its commercialism and lack of appreciation of what the Feast of Christmas is all about. You know the sort of thing I mean. It’s those sermons and parish magazine articles, read curiously by only the most devout, in which Christmas trees are dismissed as pagan cult objects; it’s the obsessiveness which bans the singing of any carols before Christmas Eve; it’s the encouragement to Christians to challenge the surrounding culture with the ‘real message’ of Christmas. My point is not that we should lose the significance and distinctiveness of the Christian calendar but rejoice at the ‘rumours of God’ which are stirred in the spirits of all people at such times.”

Tomorrow’s readings point to those “rumours of God”. The Genesis account of creation reminds us of the God of new beginnings who replaces darkness with light. “Then God said, ‘Let there be light’; and there was light. And God saw that the light was good; and God separated the light from the darkness.”

The reading from St Mark’s Gospel chapter one describes the baptism of Jesus by John the Baptist. It is another new beginning but note the starting point in this the earliest of the four Gospels. There is no reference to a stable, to shepherds or wisemen or any of the other details we tend to focus on at Christmas.

Instead, Mark introduces us to the adult Jesus, Emmanuel, God with us who accompanies us on our life’s journey through “all the changing scenes of life, in trouble and in joy”.

And we are reminded in this season of Epiphany that this is a promise to all people for all time which helps us to face the future with hope, no matter how bleak things may seem right now.

Last August, a large part of Beirut, the capital of Lebanon, was destroyed by a massive explosion which killed 204 people and injured over 7,500. It left over a quarter of a million people homeless.

A local artist, Hayat Nazer, said the damage to her city and loss of life, including friends broke her heart.

However, along with other residents, she joined efforts to clear the debris from the streets and so restore the city.

As she did this, she got an idea to use some of the debris to create a statue that would inspire people to unite and rebuild.

She collected broken glass and twisted materials that belonged to people’s homes before the explosion to create a statue of a woman raising Lebanon’s flag, her hair and dress flowing in the wind, symbolising the city’s hopes of rising from the rubble and a new beginning.

Hayat Nazer reminds us that God uses ordinary people to be signs of his promise of renewal and restoration: “Forget the former things; do not dwell on the past. See, I am doing a new thing! Now it springs up; do you not perceive it? I am making a way in the wilderness and streams in the wasteland.” Isaiah 43.