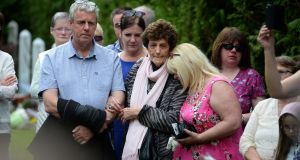 Philomena Lee, with her son Kevin and daughter Jane, and Mary Lawlor (right) from Adoption Rights Alliance at a commemorative service on the grounds of the former Sean Ross Abbey mother and baby home in Roscrea, Co Tipperary, in 2014. File photograph; Dara Mac Dónaill

Mother and baby home survivor Philomena Lee has said she is “dismayed” that portions of the final report of the State investigation into the homes were leaked to the press ahead of survivors “having sight of it and digesting its findings”.

Ms Lee, whose life was the subject of the 2013 Oscar-nominated film Philomena, said the leaking of the final report would “undoubtedly add to the heartache and trauma of those directly affected and I am concerned for the welfare of all”.

Speaking ahead of the publication of the final report on Tuesday, Ms Lee said that families should be compensated for the “unbearable suffering and loss” caused by the institutions.

“Irish people owe it to the memory of those mothers and children, who have died, without knowing the truth and to resolve that such atrocities will never be allowed to happen again,” Ms Lee said in a statement on Monday.

Minister for Children Roderic O’Gorman said he would seek an investigation into how sensitive details of the report were leaked to The Sunday Independent at the weekend.

Taoiseach Micheál Martin is to make a formal State apology to survivors of the mother and baby homes in the Dáil on Wednesday. It will follow the publication of the Mother and Baby Homes Commission of Investigation Report, which is understood to say that 9,000 infants died in those institutions after 1922. A spokesman for the Taoiseach confirmed that the final report of the commission would be presented to survivors on Tuesday.

Ms Lee was sent to a local orphanage after her mother died when she was just six years old, along with her two sisters. She lived at the orphanage, run by the Sisters of Mercy, for 12 years.

She emerged from the orphanage aged 18 and met the father of her son, Anthony. Ms Lee said her pregnancy was “met with horror” and she was sent to the Sean Ross Abbey mother and baby home “without a clue of what was in store for me”.

She raised her son there for three years before he was sent to the US without her knowledge or consent. They both spent years attempting to find each other but Anthony passed away before they could be reunited.

“For the purposes of healing, I believe it is essential that the Irish State and various churches involved in the enslavement of unmarried mothers and the trading of their children, would apologise, without reservation and would compensate the many generations of families, who have suffered unbearable suffering and loss as a result of the state’s failure to recognise and honour the equality promised to all Irish citizens by the State’s founders,” Ms Lee said.

“I can only hope that the authors of this report, recognise these facts and that those of us who were detained against our wills in ‘mother and baby homes’ and gave birth there are not all of the mothers nor all of the children who have suffered and that the tens of thousands, who went through State maternity hospitals, State children’s hospitals and various private institutions suffered the same fate, the unlawful destruction of their families, through forced adoption, child trafficking, forced labour etc.”