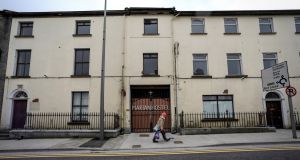 The Marian Hostel in Tullamore, which is due to become a direct provision centre for refugees and asylum seekers. Photograph: Crispin Rodwell

John Cusack, the manager of the Bridge Shopping Centre in Tullamore, prides himself on neutrality.

He recalls with a flicker of a smile how he recently stopped the Minister for Finance from canvassing in the centre because he had not asked permission. “I have to be seen to remain neutral.”

So, like many in the Co Offaly town, he is reluctant to give a personal view on what he thinks about the new direct provision centre opening on the main street.

As a prominent local businessman, Cusack has heard all sides of the argument. “There’s a lot of anger about the way it was announced,” he says, standing in the middle of the busy shopping centre.

Rumours have been circulating about the centre since well before Christmas, he says. “But there was no official mention of it before the election.”

But there is also “a lot of sympathy” for the asylum seekers who will start moving into the centre in as little as two weeks.

Furthermore, locals have seen how the proposed opening of centres in towns like Oughterard and Rooskey led to protests and community tensions – tensions which were sometimes inflamed by far-right, anti-immigration activists.

It is early days but so far there is little evidence of a similar trend in Tullamore. It’s a prospect the town wants to avoid, says Cusack. “Look, this is going to happen one way or the other. We have to try keep dialogue open, keep people talking.”

Eventually, Cusack ventures an opinion of his own. “Personally I don’t think it’s going to be a big challenge. This is a multicultural town already. Look at the amount of nationalities that are after passing since we started talking.”

Up the main street the sounds of builders can be heard from inside the Marian Hostel as work continues to convert it from a 35-bed hostel to a modern facility intended for up to 168 asylum seekers.

The first residents – nine families from a variety of countries – arrive next month, with the rest arriving on a phased basis later. The Department of Justice has a two-year contract with the facility’s managers, Bridgestock.

Outside the Marian, locals are reluctant to share their views. Most of those who do talk usually decline to give their name.

“I would be very against it,” said an elderly woman bringing her shopping home. “With all the homeless we have.”

Evelina, who works nearby, says she will welcome the asylum seekers – “I put myself in their shoes” – but she fears they might experience a negative backlash from some locals. “Some people have a lot of hate, a lot of fear.”

Since confirmation of the centre came on Monday, local radio station Midlands 103 has heard from many of these locals. “The callers have generally been pretty negative,” says director of news Sinéad Hubble who produces the station’s flagship broadcast, the Will Faulker Show.

Some of this is down to confusion and misinformation, she says, including rumours that the asylum seekers will go to the top of the housing list.

The department has said that those in the asylum system are not eligible for the housing list. If they are later granted asylum and qualify for social housing they will take their place on the list like everyone else, officials said.

Many locals have wondered how 168 men, women and children will fit into a 35-room building.

The answer came during a meeting between department officials and local representatives on Thursday evening. As well as in the Marian, asylum seekers will be housed in three other properties located beside and across the road from the former hostel. Furthermore, one official said, the figure of 168 is the maximum capacity. “We don’t think that many will actually be housed there.”

Fresh out of the meeting, Fianna Fáil councillor Tony McCormack says officials told him they were not able to hold prior consultations about the centre because the contracts had not yet been signed.

He is not satisfied with the explanation. “A lack of information causes vacuums and those vacuums are filled with fear and racism.”

Nevertheless he does not believe Tullamore will see protests like those in Oughterard, Achill and elsewhere. In fact, the councillor says he has already heard from “a good few” people eager to join the welcoming committee for the centre.

“We have seen that when these centres are up and running, around the country, there isn’t a another word about them,” McCormack says.

Back at the Bridge Shopping Centre, Cusack tends to agree. “In a month’s time everyone will turn around and ask what was that all about.”