President Higgins calls for positivity in efforts to form government

President Michael D. Higgins has said that he has great confidence in the process being undertaken to form the next government, wishing all parties well with their talks. Video: Bryan O’Brien 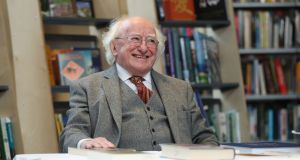 President Michael D Higgins has expressed confidence that a way will be found through the unclear political picture that has emerged following the general election. Photograph: Niall Carson/PA Wire.

President Michael D Higgins has expressed confidence that a way will be found through the unclear political picture that has emerged following the general election.

With no party emerging from the weekend vote with more than 40 seats, the path to forming a sustainable government looks like it will be complicated.

Mr Higgins encourged those involved in the process to be positive and wished them every success in dealing with the various options they will face.

“At the appropriate time people will visit me in the Áras and I will give my blessing for however long it lasts.”

Asked for his views on the current situation, Mr Higgns said “the people made choices and my office is very, very clear as to what is appropriate for me and what isn’t”.

“I await these developments but it’s very, very important to be positive. I have great confidence in the process that we have. We’re very fortunate to have a Constitution that lays down things very, very clearly. I want to wish all of the people who will be having discussions with each other every success.”

The President said that whatever the politicians decided “we are obviously facing into a period in which the European Union is redefining itself, in several different levels.

“We’re probably now just moving to some of the most complex parts of the trade agreement in relation to our neighbours next door through Brexit, but there are huge issues as well I think in relation to international issues obviously.”

The President was speaking at Cabra Public Library in Dublin on Tuesday. He has donated 700 books from his personal collection to Ireland’s Public Library Service. The books donated include some bought by the President since he assumed office and others given as gifts to him by authors.