Anti-abortion campaigners at the Rally for Life march in Dublin have said that they are starting the campaign now to repeal the 36 Amendment. 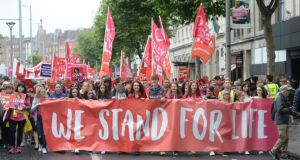 Thousands of anti-abortion demonstrators turned out in Dublin on Saturday afternoon for the annual Rally for Life.

Campaigners marched from Parnell Square to the Custom House with banners stating “abortion steals hope” and “the future is pro life” and chanting “hey hey ho ho Simon Harris has to go”.

The rally, now in its 12th year, was organised by The Life Institute, Precious Life and Youth Defence.

Organisers said the turnout showed “the commitment to the pro life cause had not diminished”.

Niamh Uí Bhriain, of the Life Institute, told demonstrators that May 25th, 2018, the day of the referendum on the Eighth Amendment, was “the most shameful day in Irish history”.

“It is not our shame, because our hands our clean. You did not vote for this and you do not bear that shame. Instead, that shame should be felt by Simon Harris, by Leo Varadkar, by the Irish media, who were the Yes campaign . . . This cruel abortion regime is a stain on what was once a proud pro-life nation,” she said.

Ms Ùi Bhriain said it is time for the anti-abortion movement to face up to the task of “restricting the harm of this cruel abortion law and ensuring that Simon Harris’s abortion regime is subject to our endless scrutiny”.

“We may have lost a battle but our cause will never be defeated,” she added.

Archbishop Eamon Martin who took part in the march said it remains “as important as ever to affirm the sanctity of all human life”.

“The direct and intentional taking of the life of any innocent human being is always gravely wrong, we must avoid becoming desensitised to the value of every human life,” he said.

“More than one year on from the abortion referendum I am calling for more practical help for vulnerable women in this country who feel that their only way out of crisis is to end the life of their unborn child.

“What new supports have we put in place for mothers and fathers at the point of crisis? And, what supports are we offering to parents who feel that they have made the wrong choice in having an abortion?”

Offaly TD Carol Nolan, who resigned from Sinn Féin last year over its stance on abortion, said she would like to see “more pro life women” in the Dáil. Ms Nolan said current politicians “do not represent the views of many of us here today nor do they want to”.

“They [current politicians] may come to the door and tell you ‘oh sure I’m pro life’ but my party did a different thing. But that’s not good enough,” she said. “They’re in the party and could easily leave. I left and I’m very glad I did leave.”

Peadar Tóibín, leader of Aontú, said his party has built a “new national movement around the country” and recruited 2,000 members. Mr Tóibín also left Sinn Féin having been disciplined over his opposition to abortion.

1 Boy’s treatment by school over alleged thefts was ‘unbelievable’, judge says
2 Irish in Canary Islands: Life has changed dramatically
3 Pubs to stay closed until September at least as restrictions tightened significantly
4 ‘This was like a nuclear bomb’: More than 2,700 injured in Beirut explosion
5 Pubs to stay closed and restrictions to remain on all gatherings, Cabinet decides
Real news has value SUBSCRIBE