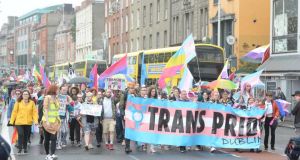 The mainly young crowd, carrying banners with such slogans as “Trans rights are human rights”, “I’m marching for my trans friends who aren’t out”, and “This is TERF-free zone” , chanted: “When trans rights are under attack, stand up, fight back”.

TERF is an acronym for trans-exclusionary radical feminist – referring to a number of feminist thinkers in the United States and Britain particularly who reject the concept that trans-women are women.

Thomas White (22) organised the last and this years’ marches with his friend Ollie Bell (22) due to their concerns about delays of three years and longer for trans people accessing hormone treatment, the absence of any surgical treatment in Ireland and increasing attacks on trans people.

“And to highlight that trans people face challenges gay, lesbian and bi people don’t,” said Mr White. “To be trans goes much further against what society determines to be acceptable. To be out as trans is far more visible. It’s seen as more of a statement and a challenge to society”

Sarah Phillips, chair of Transgender Equality Network Ireland (Teni) said with greater awareness in recent years of trans people’s issues had also come a rise in transphobia: “people questioning our identity or even our very existence, especially in the media and among some feminists and parts of our lesbian community”.

This was not as evident here as “in the UK and in the States” but was “starting to creep in here and it’s something we have to guard against,” she said.

Susan Fitzgerald, Northern Ireland regional co-ordinator with the Unite union said trade union movement had to “do more to secure rights and respect for trans people . . . We need to recognise the specific and brutal oppression that our trans members face, both in and outside of work.”

Among organisations with flags and banners were political parties Solidarity, People Before Profit, Sinn Féin, the Green Party, Labour and the Social Democrats.

Also represented were the Union of Students in Ireland, the Teachers Union of Ireland, the Northern Irish Public Service Alliance, the Abortion Rights Campaign, Rosa, and, United Against Racism.

The march, from Parnell Square to Merrion Square was greeted with applause and cheers from many on-lookers. Among them, Carlos Wynne from Dublin, who had not known the march was on.

“I think it’s fantastic that so many young people are here especially on a day when Longitude [music festival] is on. There’s no doubt about it that it [transgender rights] is something that needs to be voiced.”

David Bowman and a Sam Seyedkalan, from the United States but living in Germany said they “loved” the march. “Unfortunately we don’t have this [trans pride march] in Germany. I think it’s very important,” said Mr Bowman.

One woman, taking a photograph of the march from a vantage point at the Daniel O’Connell statue, smiled when asked what she thought of the march. Her eyes filled up and she shook her head, saying she couldn’t talk about it.