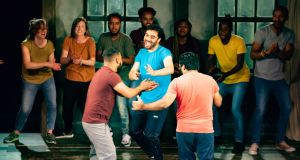 Dozens of Irish theatre practitioners have called on the Minister for Justice to use her discretionary powers to allow a man stay in Ireland after he was refused leave to remain in the State.

Malik Amir Iqbal, a Pakistani man who has lived in direct provision for five years , is awaiting a deportation order after he was informed by the Department of Justice on October 27th his application for leave to remain had been refused.

In the letter, which he received 19 months after submitting an application for leave to remain, he was told he must return voluntarily to Pakistan or be deported. He was given five days to inform the Minister when he planned to return to his country of origin voluntarily.

Mr Iqbal says he came to Ireland in 2015 seeking asylum because he had suffered violent attacks for having entered a relationship with a non-Muslim woman. He told The Irish Times the family of the Muslim woman he was supposed to marry attacked him on a number of occasions, and eventually he paid a smuggler to get out of the country. He says his own family have advised him not to return to Pakistan for safety reasons.

Two years after arriving in Ireland, Mr Iqbal was invited to join a dance troupe in Longford near the direct provision centre where he was living and has since performed in theatres and taken part in festivals around the country.

As Mr Iqbal’s initial application for refugee status was rejected in December 2016, he was not eligible to seek employment under the right-to-work legislation introduced in 2018 and instead dedicated his free time to dance performances and visual arts.

Some 35 letters from arts organisations, theatre directors, actors and academics were submitted to the Department of Tourism, Culture and Arts in early October requesting Minister for Culture Catherine Martin call on Minister for Justice Helen McEntee to use her discretionary powers to allow Mr Iqbal to remain in Ireland.

In his letter of support, actor Stephen Rea called on Ms Martin to “please do all in your power” to convince the minister for justice to grant Mr Iqbal leave to remain. “It is the very least we can do, and it is incumbent upon us as a community of artists to listen to and support international artists resident among us not out of choice, but out of urgent necessity,” wrote Mr Rea.

Choreographer Catherine Young who has work worked with Mr Iqbal in her dance shows wrote the Longford community had “lost people of immense artistic abilities to deportation orders in the past several years” and this loss had “deeply impacted our arts community”.

“We are respectfully asking that Malik’s contribution over the past three years to Irish arts practice be grounds for granting him humanitarian leave to remain here,” she wrote.

In August 2018, Mr Iqbal danced on the stage of Dublin’s Abbey Theatre with Vekash Khokhar, a Pakistani nurse who had been served with a deportation order and who left voluntarily the night of the performance. Mr Khokhar learned the following day, when a letter arrived at the direct provision centre where he had been living, his case was being reconsidered by justice officials. This review was subsequently thrown out because Mr Khokhar had left the country.

Speaking in the Dáil last week, Fianna Fáil TD Joe Flaherty called on the Department of Justice to reconsider Mr Iqbal’s case, noting the supporting documentation from the Irish community “represents easily the most comprehensive case I have seen submitted”.

Minister of State for the Department of Justice James Browne acknowledged the recent distribution of asylum-rejection letters during Level 5 restrictions “may have inadvertently caused distress” and that the extra time needed for relevant voluntary return during the pandemic would be taken into account.

He said the objective was to make decisions on international protection applications and permission to remain considerations “as quickly as possible”.

Mr Browne told the Dáil the number of negative decisions on applications had not increased but there had been a “build-up in the issuing of those decisions, with a higher volume than normal issuing in recent weeks”.

The Minister said he could not comment on the specifics of Mr Iqbal’s case but that he would bring the issue to Ms McEntee’s attention.