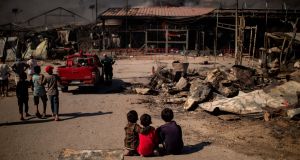 Children sit on the ground in the camp of Moria on the island of Lesbos after a major fire broke out on September 9th. File Photograph: Angelos Tzortzinis/AFP via Getty Images)

Eight children have arrived into Ireland from Greece since the Government said it would accept 36 unaccompanied minors in 2018 as part of an EU-wide commitment.

Minister for Children Roderic O’Gorman has confirmed that eight unaccompanied teenage boys had arrived from Greece in June and were “becoming acclimatised to life in Ireland”.

He reiterated the Government’s commitment to accept an additional 50 people in family groups from the burnt-out Moria migrant camp on the Greek island of Lesbos but noted delays had been caused by “additional challenges presented for travel by the Covid-19 pandemic”.

The camp, which housed 12,000 migrants, was devastated by fire on September 9th.

Responding to a parliamentary question from Social Democrats spokeswoman for children Jennifer Whitmore, the Minister said he had “moved to accelerate the arrival” of the remaining 28 children and had secured an additional €5 million to support these actions.

“At present we await details of the family groups and unaccompanied minors and clarification regarding logistics for the interview missions required to transfer refugee families to Ireland,” he said.

He added that that State’s capacity to bring unaccompanied to minors to Ireland from Greece was determined by care placements and commitments the State had made to children who had arrived in the country previously.

The expansion of care placements, the development of specialised foster care placements and the provision of aftercare supports when a child turns 18 are all being considered so as to realise the State’s commitment of bringing 36 children to Ireland, he added.

The Department of Children and Tusla, the Child and Family Agency, are working with the EU to identify unaccompanied minors who may wish to come to Ireland, said Mr O’Connor.

Last month, Minister for Justice Helen McEntee announced that an additional 50 people “within family units” would be brought to Ireland following the fire in the Moria refugee camp. Her announcement came after the launch of the 400 Welcomes campaign which saw doctors, teachers, writers, community and social care workers and musicians calling on the Government to support families stranded on Lesbos.

In September, Mr O’Gorman said the arrival of four unaccompanied children from the camp was to be accelerated and that they were due to arrive in “the coming weeks”.

Unaccompanied minors who come to Ireland under the programme are put into the care of Tusla.

A total of 1,022 people have been brought to Ireland from Greece under the relocation strand of the Irish Refugee Protection Programme (IRPP) since 2015. An additional 1,913 people have come through resettlement from Lebanon and a commitment has been made to admit 740 family members of refugees already in Ireland under the IRPP Humanitarian Admission Programme.

Another 113 people have been brought to Ireland through search and rescue missions, the Calais special project and the relocation of unaccompanied minors from Greece.

A further 230 people are due to come to Ireland from Lebanon this year following a selection process carried out last March.

When people are resettled or relocated to Ireland under the IRPP they are accommodated in one of the State’s two Emergency Reception and Orientation Centres (EROCs) which are located at the Abbeyfield Hotel in Ballaghaderreen, Roscommon and Clonea Strand Hotel in Dungarvan, Co Waterford.

In October, there were 115 people staying in Ballaghaderreen and 15 in Dungarvan. An additional 117 people brought to Ireland under the IRPP were staying at the Mosney Accommodation Centre in Co Meath.