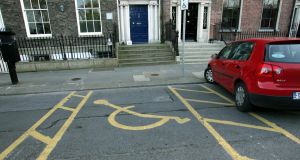 Many disabled parking spaces have been relocated during the pandemic, causing problems for users. Photograph: Aidan Crawley

Disabled parking spaces were removed during the Covid-19 pandemic to make room for outdoor dining and relocated in locations that are “not good enough”, accessibility activists have said.

Leona Tuck and Michael Hennessy Cullen have launched a social media campaign to highlight good and bad accessibility under the name The Struggle is Wheel.

Mr Hennessy Cullen suffered a spinal injury during a road traffic accident more than 15 years ago and now uses a wheelchair full-time.

The couple criticised the relocation of disabled parking spots during the pandemic, stating that it is “a major issue” for people with mobility concerns.

“With Covid this year... if we’re being honest, when it comes to accessibility, we were appalled to see our bays used for al fresco dining and for them being tarmaced over and relocated away from the same shopping streets in Dublin,” Ms Tuck said.

“This involves Limerick as well, Cork had a big issue with it as well. The pedestrianisation of streets and the knock on effect it has on bad relocation of disabled parking bays.”

Ms Tuck said there was “not enough dialogue” around the issue and how it affects people with disabilities.

“We understand that businesses need to think outside the box to survive but when you’re a wheelchair user, you know how hard it is to get wheelchair parking,” she added. “It’s quite disconcerting to see because there is a lack of communication around the planned relocation of this. It’s kind of like reshuffling a deck of cards with our bays.”

Mr Henessy Cullen added that the relocated bays “are not a good enough standard” and don’t have a dropped kerb, or have bins and poles right at the bay, preventing easy access to the vehicle.

The couple are also highlighting how to make hill walks more accessible such as having compacted trails instead of gravel and the removal of stiles and kissing gates at entrances.

The couple were speaking at the launch of the Irish Wheelchair Association (IWA)’s guidelines for designing accessible environments.

New research by the charity has found that 77 per cent of people with physical disabilities still face problems when using public pavements, parking and pedestrian crossings, and 66 per cent struggle to access public buildings offering healthcare, retail and leisure facilities.

Speaking at the same event, Oliver Murphy (85), a founding member of the IWA, said people with disabilities just “want to be part of their communities”.

“We, as people with disabilities, want to be able to go out into the world and know we won’t meet obstruction,” he added.