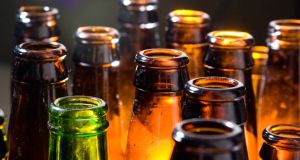 Far and away the most popular drink among Irish teenagers is beer followed by cider.

Alcohol use among Irish 16-year-olds is below the average for 35 European countries, including 25 in the EU, as is cigarette smoking. However their figures for illicit drug use, while low, are slightly above the European average for use of drugs such as cannabis, ecstasy, cocaine and crack.

The figures are provided in the latest European School Survey Project on Alcohol and Other Drugs which took place in spring and autumn last year and involved 99,647 students.

The European average was higher in two instances, with 79 per cent saying they had taken a drink and the 47 per cent who said they had done so in the previous 30 days. However 13 per cent of European 16 year olds said they had been drunk, three per cent lower than their Irish equivalents.

Far and away the most popular tipple among the Irish teenagers is beer followed by cider.

In the 35 countries surveyed, 17 per cent of 16 year olds said they had tried illicit drugs, 16 per cent tried cannabis and 2.3 per cent ecstasy.

On social media, 94 per cent of all the 16-year-olds said they had used it in the previous seven days, for an average of 2 to 3 hours per school day and over 6 hours on a non-school day.