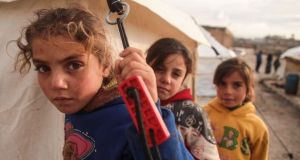 Syrian children in the south of Idlib prvoince at a camp for the displaced near the border with Turkey last year. Ireland allocated more than than €25m to the Syria crisis in 2019. File photograph: Aaref Watad/AFP via Getty Images

State spending on overseas development aid rose by nearly 10 per cent in 2019 with the Government set to increase spending by an additional €21 million in 2020.

Some €869.87 million, or 0.32 per cent of the country’s gross national product (GNP), was spent on overseas development assistance (ODA) last year, up from €791.63 million in 2018, according to figures published this week.

The Government’s Official Development Assistance report notes that 75 per cent of Ireland’s bilateral aid is now targeted at gender equality with the State supporting more than 130 countries worldwide through its funding.

More than €25 million was allocated to the Syria crisis in 2019, bringing to €142 million Ireland’s total contribution to the emergency and making it the State’s largest ever response to a single crisis.

The State also provided €8.3 million in humanitarian relief to South Sudan, €5.8 million to Somalia, €5.2 million to Ethiopia, €4.9 million to the Democratic Republic of Congo and €4.7 million to the Central African Republic.

Some €14.9 million was spent on supporting Irish NGOs overseas while Ireland also increased funding to the Global Fund to fight Aids, tuberculosis and malaria by 50 per cent, committing €50 million over the 2020-2022 period.

Another €19 million was provided to the World Food Programme in 2019 and €4.5 million was committed to a three year partnership with the International Rescue Committee focusing on gender based violence.

At least €250 million has been earmarked for the coming four years for “global education” while €6 million will be spent over three years on the Education Cannot Wait Unicef fund.

The report notes that the Government plans to “expand its footprint” on the continent of Africa by opening three new embassies in French-speaking countries by 2025 while doubling the number of postgraduate students from Africa on the Africa Ireland Fellows Programme during the same period.

It adds that the Government is still committed to allocating 0.7 per cent of the State’s gross national income to development aid by 2030 in line with the UN’s sustainable development goals.

Ireland comes 12th on the Organisation for Economic Co-operation and Development (OECD) list of development assistance with Luxembourg, Norway and Sweden holding the top spots for overseas support.

In the report, Minister for Foreign Affairs Simon Coveney warns of a growing conservatism and increasing pushback against the advancement of rights for women and girls globally, adding that Ireland is “acutely aware, through our own national experience, of the power of gender equality in transforming societies and unlocking the potential of individuals”.

Having more women in parliament decreases the risk of conflict and human rights abuses while women’s “meaningful participation in peace processes makes agreements more likely to be implemented and to last”, said Mr Coveney.

State of the World report

Also published this week, the UN Population Fund’s (UNFPA) State of the World report warns that one third of women worldwide will experience physical or sexual violence at some point in their lives with many millions still suffering the effects of female genital mutilation (FGM), early and forced child marriages and son preference. It notes that “no country can claim to be entirely untouched” by these practices.

FGM is most commonly practiced in east Africa. An estimated 5,790 women and girls in Ireland have undergone FGM, while an additional 2,700 women and girls in the State are believed to be at risk of cutting. FGM involves the partial or total removal of the female genitalia with the aim of inhibiting a woman’s sexual feelings.

On gender quality, it will take nearly 100 years to close the overall gender gap and 257 years to close the gender gap when it comes to participating in the economy, it writes, citing the World Economic Forum. Policies informed by “feminist perspectives” and a “feminist foreign policy” can encourage countries worldwide to prioritise gender equality and provide sufficient resources to achieve these goals, it concludes.