Rise in racially motivated crimes in Ireland must be tackled, says UN rapporteur 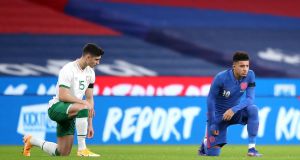 Hate crime legislation should be introduced as soon as possible to address an escalation in racially motivated crimes and help build a safer society for Irish citizens, the UN rapporteur on the elimination of racial discrimination in Ireland has said.

Efforts are also needed to tackle the prevalence of hate speech on social media which has become increasingly rampant, Prof Verene Shepherd warned this week.

Prof Shepherd, who oversaw last year’s UN review of Ireland’s efforts to tackle racism, told The Irish Times the global growth of the Black Lives Matter movement has shone a light on the importance of robust hate crime legislation.

She paid tribute to the young black Irish people who spoke publicly in recent months about the racism they had experienced in Ireland and said it was “heartwarming” to know Irish people were paying greater attention to issues of discrimination within their own borders.

Tolerance has to be taught to kids. We need to teach about racism and all its ugly forms early

The Government committed in June to introducing hate crime legislation within 12 months and said it would revise and update the 1989 Incitement to Hatred Act. A spokesman for the Department of Justice told The Irish Times its review of hate speech and hate crime was being finalised and is due for publication in the coming weeks. Minister for Justice Helen McEntee expects to bring draft legislation in this area to Government for approval in the new year, he said.

Last year the UN Committee on the Elimination of Racial Discrimination (CERD) also warned of a “high incidence of racial profiling by gardaí” and said the Judicial Council, gardaí, prosecutors and judges should receive training on methods for identifying, investigating and prosecuting racist hate crime.

“We’re emphasising again the issue of education and training for public officials,” said Prof Shepherd, adding that education on racism in schools was also vital. “Tolerance has to be taught to kids. We can’t just teach them when they’re adults and when they become police officers. We need to teach about racism and all its ugly forms early. We need to use education to prepare our citizens to be more tolerant and to shun racist thoughts and racist acts.”

Prof Shepherd said anecdotal evidence presented to the UN last December had indicated a high level of discrimination towards black Irish people and people of African descent in the workplace and said more up-to-date, disaggregated ethnicity data was badly needed to better understand the racial barriers people face in work.

Both State bodies and civil society have a role to play in ending racism, she said. “If we understand that we have a collective role to end racial discrimination we can work towards truly creating a better world. We cannot continue in this fractured state of inter-ethnic and interstate relations. It’s up to us to fix what’s wrong.”

Ms Shepherd also warned of the impact of Covid-19 on minorities, saying the pandemic was disproportionately affecting certain vulnerable groups. “We cannot come out of Covid the same way we went in. We need to be better.”

Sinéad Gibney, chief commissioner of the Irish Human Rights and Equality Commission, which presented its findings on racism in Ireland to the UN last year, agreed that Covid-19 had “further exposed the way in which structural discrimination in Ireland impacts different groups”, particularly among Travellers, people of African descent and Roma.

Ms Gibney underlined the “urgency in addressing longstanding inadequacies in Ireland’s approach to hate crime and hate speech” and noted that the Government’s approach to these issues should not purely focus on criminal sanctions. A “wider cultural shift to a more inclusive, representative and respectful public sphere” is needed to ensure a “whole-of-society response”, she said.

Prof Shepherd commended the Government for establishing an anti-racism committee in June 2020, which has been tasked with drafting an action plan within a year, but said she hoped to see further progression of the UN recommendations when the State presents its one-year follow-up report in 2021. The UN committee will be “heartened” by the news that the Government had committed to ending direct provision and will look forward to reading the Government White Paper due for publication in December, said Prof Shepherd.