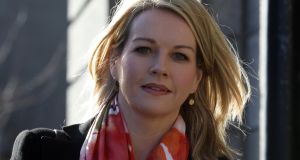 RTÉ has confirmed it received a number of complaints about the Claire Byrne Live Referendum Special which was broadcast on Monday night. Photograph: Collins Courts.

RTÉ has confirmed it received a number of complaints about the Claire Byrne Live Referendum Special which was broadcast on Monday night.

Viewers complained on social media and directly to the broadcaster about the manner in which audience members were permitted to cheer and jeer speakers on the panel and in the audience during the debate on the Eighth Amendment.

The Terminations for Medical Reasons (TFMR) group – which supports couples who experience diagnoses of fatal foetal abnormalities – has called for an opportunity to speak on RTÉ television after what they describe as being “ignored, jeered at and humiliated” on Monday night’s show.

Three couples from TFMR had been invited to sit in the audience and had understood they would speak.

“We attended in good faith to tell people about the reality of the living through a pregnancy with a dying baby under the Eighth amendment. Not one woman affected... was given any time to speak. We waited respectfully for an opportunity, but the room became increasingly hostile, unpleasant and aggressive,” the group said.

“No campaigners in the audience were offered speaking time repeatedly and Claire kept going back to them but never once came to us.”

The group added: “It appears RTÉ and Claire Byrne staff did not have any plan in mind for the show’s format...We were all ignored, dismissed, jeered at and humiliated by a crowd acting like football hooligans. This is not the atmosphere we should have when we’re talking about the unbelievable trauma and pain that the Eighth Amendment has caused.”

Gaye Edwards, a former member of TFMR, who was in the audience, said: “The producers asked us some days before what we would speak about. We had assigned seating so they knew where in the audience we were. When we heard people on the panel refer to us as ‘hard cases’, as if we were not real families, and imply that if we had not had terminations our babies would still be alive, our six hands shot up. We had them (up) the whole time.

“We are the people who were directly affected by the 8th and we didn’t get to contribute, while people were allowed talk about us.

“There is another Claire Byrne show before the referendum. The wrong could be righted there,”said Ms Edwards.

A RTÉ spokeswoman said complaints were received about the show from the public but would not say how many.

“The audience was evenly divided between Yes and No. Impartial analysis...will show that when the number of speakers on each side of the referendum question and the airtime afforded to them are both taken into account, the programme gave an equitable and fair opportunity to both sides to express their views.

“The programme team directly invited just four people to be part of the audience on the night, all of who were Oireachtas members. The ‘Yes’ and ‘No’ campaigns were offered a set number of audience tickets to disperse to campaigners of their choosing.

“All other audience members were filled through an open audience application process and the final makeup was a balance of ‘Yes’ and ‘No’.

“While the programme did its best to include as many voices as it could, it was not possible to speak to everyone and it was made clear to every audience member in advance that there was no guarantee they would get to speak on the programme.

“Nevertheless the perspective of the TFMR group was strongly represented on the panel and by other audience members on last night’s programme and viewers will have been in no doubt about the argument the group makes.”