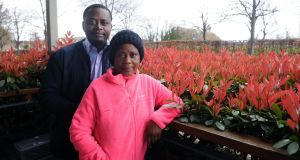 Charity Magee, orginally from Zambia, and her son Charles Kabwe in their home in Dublin. Photograph: Aidan Crawley/ The Irish Times

An Irish woman suffering from stage 4 terminal lung cancer has called on the Government to allow her son temporary permission to remain in Ireland to care for her in her final months following notification that he must leave the country this summer.

Charles Kabwe came to Ireland from Zambia in late 2017 after his mother Charity Magee, a Zambian-born woman with Irish citizenship, was diagnosed with non-small cell lung cancer (adenocarcinoma) and given six months to live. Despite doctors’ expectations, Ms Magee is still alive but seriously ill.

Mr Kabwe has spent €600 on visa renewals since coming to Ireland but was recently told that once his latest visa expires in August 2019 he must leave the country.

He was told that if he wants to return he must apply for the D-Join family visa.

I’m in constant pain now. He lifts my spirits

A letter dated March 4th, 2019 wrote that “no further permissions will be granted on the expiry of this permission”, adding that if Mr Kabwe did not leave the country on the agreed date he would be deported.

“If I go back and re-do the visa it could take another six to eight months to get back here and by that time it could be too late,” Mr Kabwe told The Irish Times. “I’m the only child, I want to be with her and see her through this.”

Mr Kabwe, who is married and has a nine-year-old son, says his life is in Zambia and he plans to return.

However, for now, he feels the need to be in Ireland. “The doctors have said there’s nothing we can do. I know she’s not going to be cured and that’s quite hard. I’m the one looking after her.”

Ms Magee, who has lived in Ireland since 2006, said she temporarily felt better after her son arrived but that her condition has deteriorated again in recent months.

Her husband is working extra hours in addition to his full-time job to pay the healthcare costs and she says she needs her son at home to care for her during the day.

“He lifts my spirits. When you are sick you need your loved ones and he’s my only son. Where we come from in Zambia you look after your parents when you’re sick. The doctors said I don’t have much life left, they’re not going to cure me. So for this short period I’d like my son to be with me.”

Staff members from St James’ Hospital and the Beacon Hospital have contacted the Department of Justice recommending that Mr Kabwe be given permission to remain in Ireland through his mother’s illness.

A letter from a senior medical social worker on the St James’ Palliative Care team wrote that Ms Magee was going through “a very physically challenging and emotionally stressful time” and that having her son present “would alleviate some of the strain” she is feeling.

“I feel that given these very difficult circumstances her son, Charles Kabwe, should be given permission to remain for a further period of time,” wrote the social worker in 2018.

A spokesman for the department said any individual is allowed to seek immigration permission to remain in Ireland on a temporary or longer term basis on “compassionate or other grounds”.

“A fair and proportionate immigration system is in place which makes provision for consideration of cases that may present a challenging set of circumstances, normally humanitarian,” he said.

“Such decisions are made on a case by case basis having regard to a comprehensive consideration all relevant information and documentary evidence presented in support of the request for permission to reside in the State.”