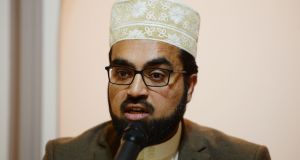 A leading Muslim cleric has called for legislation banning commentary that “dehumanises” his community or appears to justify the murder of Muslims.

Shaykh Dr Umar Al-Qadri, chair of the Irish Muslim Peace and Integration Council, said Irish politicians and media did not engage in Islamophobic rhetoric. However, they did ignore it when espoused by online activists, and this was “hugely problematic”, he said.

Speaking on RTÉ radio on Saturday, on the issue of Friday’s massacre in the New Zealand city of Christchurch of 49 people at two mosques, Dr Al-Qadri said the Muslim community in Ireland “felt what happened in New Zealand and we are still feeling it”. He said the community’s leaders were meeting gardaí to assess security at mosques here.

Asked whether the community was fearful, he said: “We are indeed, because anti-Muslim rhetoric, Islamophobia, has been ignored, has been allowed to take place through politicians, through social media activists – everywhere in the world.

“The reality is the incident yesterday did not happen in one day. There was a whole process of radicalisation, of dehumanisation, of dehumanising the whole community... This continuing anti-Muslim, anti-Semitic, anti-other rhetoric that we find in this world, in this day and age, I find hugely problematic.

“We need stronger legislation throughout the world, not just in Ireland. I believe anyone that promotes hatred or extremism online should be held accountable for that.

“Tech giants like Facebook. they should be able to straight away remove any such posts...People that share...that celebrate what happened yesterday...should be held accountable.”

He said free speech could sometimes become incitement to hatred and there was a place for legislation, like that in some parts of the world where the publication of anti-Semitic material is prohibited.

He said there was a Islamophobic material online which was “very problematic”, worrying and prevalent.

A steady stream of people arrived at Dublin’s pro-Cathedral on Saturday to sign books of condolences for the victims of the Christchurch massacre. By lunchtime, when the books had been open two hours, there were about 50 signatures from people from Australia, New Zealand, Italy, Bray in Co Wicklow, Ashbourne in Co Meath, Co Cavan, Co Roscommon, Co Clare and from across Dublin.

Bernie Campbell from Dublin described the murders as “devastating”.

“The world is gone crazy,” she said. “It’s gone out of hand. There is so much hate and anger, and we’ve become too used to it. It’s like the murders in Dublin. They don’t shock any more.”

Ann Daly, from Portlaoise, said she was “sick of the stereotyping of Muslims” and the “negative comments”.

“People are people and the loss is huge. I have many Muslim friends and I know the good in people. I reject the negative stereotyping out of hand.”

Pat McCabe, who lives on Gardiner Street, said he visited the pro-Cathedral every day “for a few minutes...It’s very sad what happened in New Zealand, very sad. Regardless of any religion, that shouldn’t happen.”

The pro-Cathedral will close at 7pm on Saturday and re-open at 10am on Sunday in advance of a short remembrance service for the dead and injured, to be led by Archbishop Diarmuid Martin between 10.30 and 10.50am.

The service will be attended by President Michael D Higgins, who will then attend the 11am Mass at the Pro-Cathedral for St Patrick’s Day.