‘I long for the day when we don’t have to celebrate how fabulous we are,’ says former rugby international 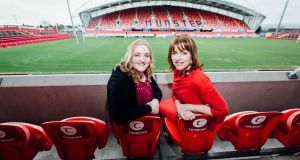 Women need to focus on building resilience and grasping opportunities, a conference held in Limerick to celebrate International Women’s Day on Friday heard.

Former Irish rugby international Fiona Steed said women should “be proud, be positive and be passionate. It’s okay to be good at stuff and to highlight it. Being quietly confident or even loudly confident is okay.”

A survey of 700 women by conference organiser, Network Ireland, revealed one in three find it difficult to speak up in professional settings. Just under half have never applied for a promotion, and 38 per cent have never asked for a pay increase.

“Attitudes are changing, but we do have this unconscious bias where we assume that men are very ambitious, and we don’t make the same assumptions about women,” said director Lorraine Lordan of the four times Oscar-nominated animation studio, Cartoon Saloon.

Women shouldn’t hesitate to describe themselves as “ambitious”, she said. “I do think I am an ambitious person, and I don’t think that’s a negative. Don’t be afraid to put your hand up. Prepare yourself and have your arguments ready.”

She said in her own experience, “I’ve been in situations where there is an assumption that the guy standing next to me wants to progress and wants to direct, whereas I have to put my hand up and say I want to do that too. I think it’s oversight more than a conscious decision.”

Lordan said we also need to ensure the message about women we give to children are positive and empowering, particularly from a young age. “With animation and children’s TV programming, we have a great responsibility. If they’re always seeing women as a sidekick character, and she’s always the same kind of sidekick character, what message are we giving them?”

The Network Ireland survey found one in four women didn’t go for a promotion due to family commitments. On the domestic front, the number of women in a relationship who said they did the bulk of the work running the household was matched by the number who said they split it with their partner. But only 4 per cent of women said it was their partner who took on the bulk of domestic work.

Fiona Steed, who was capped 62 times for Ireland before her retirement in 2004, and who is now group lead of Allied Health at UL Hospitals and a part-time rugby analyst, said we need to talk more about the men who are the main carers for their children.

Her husband, the former international rugby player John Hayes combines working on the family farm with caring for their three children. “He’s a man’s man, and he’s totally hands on. We need to hear more about those men.” We need to get the message out that “it’s not emasculating” for men to be the primary carers for their children.

Over the last century, International Women’s Day (IWD) - which has its roots in the trade union movement - has evolved into an occasion of protest, celebration, corporate platitudes, and moments of real progress. This year, the Government marked it by ratifying the Istanbul Convention, a key international instrument in tackling violence against women.

Other IWD events held around the country included a Rise Up Rally in Belfast; an event celebrating female-led music and theatre held at the Rotunda, and an abseiling event at Croke Park, organised by Plan International’s Because I am a Girl campaign. Around 1,600 people attended an event hosted by Kathy Sheridan of he Irish Times Women’s podcast and Accenture, looking at the role of technology in fostering inclusion and equality.

One frequent criticism of the global celebrations is that they are too focused on success in the boardroom, and not enough on other definitions of success. Steed, who coaches girls at under 14 level in rugby, highlighted the importance of sport for girls and young women. “If you’re competitive in sport, it makes you competitive in nature. Success breeds success. We’re teaching girls rugby, discipline, respect. There’s the camaraderie they get, the health benefits, and the resilience they develop.”

Another accusation levelled at the day is that it is not always inclusive of women who stay at home full time to care for their children, or those who care for other people’s children. Steed said we need to recognise the value of all of the choices women make in their lives. “We have to empower women and girls to make the best choice for them, whatever that is. I come from a female line of women who didn’t work outside the home once they got were married, and they’re my strongest influences,” Steed said.

This year, the day came in for criticism from Minister of State for Higher Education Mary Mitchell O’Connor, who said it needed to be repurposed, and was at risk of becoming “a chance to skive off with friends”.

“The problem as I see it is that International Women’s Day is in danger of becoming what holy days used to be when we were going to school back in the day, a chance to skive off with friends and to have no homework for that day,” she said.

Until those enablers are in place, quotas and days dedicating to highlighting women’s issues are necessary. “I long for the day when we don’t have to celebrate how fabulous we are. But while we do, let’s drive on and be proud of it.”