Percentage of people presenting for treatment who are already dependent climbing 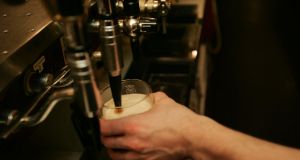 There has been a steady increase in the percentage of people who are already alcohol dependent when they present. Photograph: Eric Luke

Women’s drinking habits are becoming more similar to men’s with more than two-thirds of women who presented to the State’s alcohol treatment services in 2017 classified as “alcohol dependent”, new data states.

Three-quarters of the cases in 2017 related to people who were “alcohol dependent”, although it is important to note that each record relates to a treatment episode, or a case, and not to an individual, meaning the same person could be counted more than once.

Alcohol dependence is defined as a strong desire to consume alcohol, impaired control over use, persistent drinking in spite of harmful consequences...

There has also been a continued increase in the percentage of new cases who are already alcohol dependent when they present for the first time, from 50 per cent in 2011 to 68 per cent in 2017.

The data, based on figures from the National Drug Treatment Reporting System, shows almost three-quarters of all men who presented in 2017 were alcohol dependent, compared with 68 per cent of women.

Alcohol dependence is defined as a strong desire to consume alcohol, impaired control over use, persistent drinking in spite of harmful consequences, a higher priority given to alcohol than any other activities, increased tolerance and withdrawal reaction.

There is a huge personal and familial cost to the individuals involved, and a huge societal cost

“Some of the data would say that women’s drinking habits have changed and are becoming more similar to men,” she said. “The high number of people who are alcohol dependent, and in particular those who are classified that way when they first present for treatment, is really worrying. It is so much more difficult to treat and get into recovery if you are already dependent.”

Prof Frank Murray, chairman of Alcohol Health Alliance Ireland and a liver specialist, said it was “striking” that women and men seem to have similar rates of alcohol dependence in the sample.

“That reflects a lot of our clinical experience that the gap between women and men in relation to this issue is falling,” he said. “There is a huge personal and familial cost to the individuals involved, and a huge societal cost, because the unemployment rate [among them] is 52 per cent.

“One of the issues around alcohol that we don’t really face up to as a society is that it causes a huge loss of productivity and a huge loss of life. These people are in the prime of their lives, unlike many other illnesses, which tend to be when people are older.”