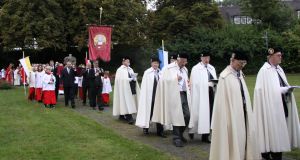 While the head of St Oliver Plunkett is safe in Drogheda, Archbishop Eamon Martin on Saturday gave thanks to the Benedictine monks in Germany who guarded the Irish saint’s body.

On Saturday, Archbishop Martin, the primate of all Ireland, and 20 Irish pilgrims took part in a special procession and Mass in Lamspringe, Lower Saxony, to celebrate two centuries of reverence for the former Archbishop of Armagh.

“I get a sense of great pride to have been the keeper of the relics for 200 years,” said Archbishop Martin, St Oliver Plunkett’s modern-day successor. “I feel as if the people here are our cousins and we have a common ancestor.”

Oliver Plunkett was ordained a priest in 1654 but lived in exile after the Cromwellian conquest of Ireland. Appointed Archbishop of Armagh in 1669 and consecrated in Ghent, he returned to Ireland the following year.

In 1678 he was arrested and accused of plotting a French invasion, but his first trial in Ireland collapsed. After a second and third trial in London he was found guilty of high treason and condemned to death.

On July 1st, 1681, aged 55, he was hung, drawn and quartered - the last Roman Catholic martyr to die in England. While his head founds its way to Rome - and later to Armagh and finally St Peter’s church in Drogheda, in 1921 - the rest of his remains, minus head and forearms, were exhumed in 1683 and transported to Lamspringe, 80km south of Hanover, in Lower Saxony.

The 1683 transport was organised by Fr Maurus Corker, president of the English Benedictines, who had visited the Irishman in prison and ensured he was allowed to celebrate Mass in the last fortnight of his life.

Through the penal era of Catholic oppression in Ireland, Benedictine monks in Lamspringe venerated the memory of the Irishman - a practice that continues to this day.

Saturday marked the annual St Oliver Fest, the high point of which is a procession of relics of the Irishman through the town. “What is amazing is to travel to a different part of the world and see pictures and paintings of Oliver Plunkett all around, as well as a very beautiful altar and shrine,” said Archbishop Martin, on his first pilgrimage to honour his predecessor, who was beatified in 1920 and canonised a saint in 1975.

He said he sensed a “common journey in the faith” with locals in the diocese of Hildesheim, also struggling with the impact of secularisation and a decline in vocations.

He said there was great “puzzlement” over Brexit and concern over its impact on Northern Ireland and his diocese, which straddles the Border.

After the Lamspringe monastery was dissolved in 1803, most of St Oliver Plunkett’s remains were moved to Downside Abbey in England, though some relics remain in Germany.

Archbishop Martin thanked the German congregation for keeping alive the memory of St Oliver Plunkett during difficult times in Ireland, and invited them to next August’s World Meeting of Families 2018 in Dublin.