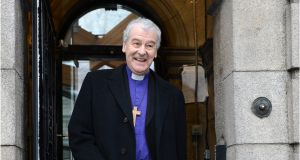 People along the Border in Ireland were “fast becoming a pawn in a politics of cynical neglect and atrophy of understanding” in the current Brexit debate, the Church of Ireland Archbishop of Dublin Michael Jackson has said.

“They are our people too, however different they may sound,” he added, in comments during an address in south Dublin on Tuesday.

The archbishop, who is from Lurgan, Co Armagh, and was bishop of the cross-Border Clogher diocese from 2001 to 2011 before becoming Archbishop of Dublin, said that “the people of the Border are people like myself with whom I have grown up, whom I greatly respect and with whom I subsequently ministered”.

The backstop, he said, was “a European issue that cannot be ‘marketed’ as solely an Irish problem. People live and work on what is now changing from being a peaceable Border to being a contested Border,” he said. “Peace in its day was courageous. Peace today remains a precious prize right across Ireland. Our peace is an international agreement.”

It was “still terrifyingly unclear what story the picture of Brexit will tell in both parts of this island.

“One thing, however, is clear: obsession around the backstop has effectively stopped us from asking what, in fact, is the frontstop. And another fact is that it is not the Irish backstop; it is the European backstop,” he said.

Delivering his presidential address to the Dublin and Glendalough synods in Taney, south Dublin, on Tuesday afternoon, he noted how “as many predicted, our debate and discourse have coarsened as they have hardened. Populism and parliamentarianism are both pitted against one another and conflated in charismatic, if less than attractive, personalities. As the future recedes, so does the past.”

His thoughts were “with the whole range of people who are affected by Brexit in many jurisdictions and in a very specific way in Ireland and in the Church of Ireland”.

He recalled how a distinguished scholar suggested recently “that the reaction of the then new Church of Ireland . . . to disestablishment in 1869 was to move firmly in the direction of introspective self-protection and withdrawal from the public square”.

He continued: “While nobody dare refute such an analysis, and while we see ample and daily evidence of it, I would have to say that if we let such a mindset of decline and demoralisation continue and deepen, it does not bode well either for our institutional survival or for our individual engaged citizenship in both the Republic of Ireland and in Northern Ireland. And it fails to do enough with our gospel-inheritance.”

Such analysis “had more to do with political survival than it had to do with church or theology” and “puts too much emphasis on the burden of inheritance and therefore on a type of inherited elitism and too little emphasis on the exploration of Anglican identity”, he said.

Warning that significant gaps remain in talks between Brexit negotiators