Nude Biblical images by Glenstal monk are banned by Facebook 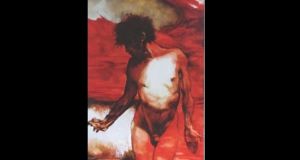 The Good Thief, by artist turned monk Br Emmaus, features in Glenstal Abbey – Through the Seasons

Facebook has banned a post advertising a new book from the monks at Glenstal Abbey in Co Limerick because of nudity in illustrations of the Good Thief crucified with Christ, and of the Archangel Michael.

A spokeswoman for Columba Books, which is publishing Glenstal Abbey – Through the Seasons, said the images had been “deemed ‘too sexual’ by Facebook and against their policies”.

However nude images of the Good Thief from the book have been posted by the Irish Catholic newspaper on its Facebook page. A caption accompanying the images reads: “Nude paintings in a monastery library? The IC (Irish Catholic) can exclusively reveal that a new book on #GlenstalAbbey from Columba Books features nude paintings called ‘The Good Thief’. Is it appropriate to hang on the walls of a library within an Abbey? You decide!”

Columba Books and the Irish Catholic are both owned by Grace Communications.

Giving its reason to Columba Books for rejecting the advertisement, Facebook said: “The ad isn’t running because it doesn’t follow our Advertising Policies which apply to an ad’s content, its audience, and the destination it links to. We don’t allow ads that feature people with excessive skin visible.”

It recommended “using content that focuses on your product or service rather than the model.”

Columba Books responded: “The ‘nudity’ in question is art pieces from a Benedictine monk at Glenstal Abbey. It’s art! Not a photo, does not feature a real person, and has been shared with permission.”

In a further response, headlined, “Here’s what’s preventing your ad from running,” Facebook said, under the heading “Image” that: “We don’t allow ads with content that features sexually suggestive posturing or that shows a lot of skin (even if it’s for an artistic or education reason) because of their highly sensitive nature. I suggest you have a look at our Advertising Policies for more details, including some do’s and don’t s.”

This it repeated under two further headings “Leading Page” and “The reason behind our policies.”

In the book, Br Emmaus says: “Prior to my solemn profession at Glenstal Abbey in 2014, I worked as a graphic designer in Los Angeles, USA, for ten years after receiving my BDes from the National College of Art and Design in Dublin.

“Currently a student of the University of St Michael’s College in the University of Toronto, Canada, I am about to enter my third year of doctrinal studies. My area of research concerns questions involving the need for contemporary liturgical art to adapt Christian iconography in terms of postmodern recontextualisation.”

He says: “In rendering the human figure naked ‘to follow the naked Christ’, these paintings, like the Benedictine commitment to a life of daily conversion, echo the challenge to emulate the paupertas, nuditas, et humilitas Christi (the poverty, vulnerability, and humility of Christ) and become, in ourselves, transparent images of the God who made us.”